Dreamforce 2019: View from the airport

Time has been called on Salesforce’s big shebang for another year, so what did Dreamforce 2019 deliver?

Traffic in central San Francisco can now go back to normal (read: relatively chaotic rather than an absolute standstill interspersed with occasional snail-like movement) for now. For it’s time to take down the giant woodland scenery and fake grass and pack the fluffy character costumes away as Dreamforce, Salesforce’s annual get together, has come to a close for another year.

The company, as perhaps should be expected, focused a great deal on data and data analytics. In particular, co-CEO and co-founder Marc Benioff said we are now in the fourth wave of computing. He talked about how we have moved from systems of record to systems of engagement, to systems of intelligence and now find ourselves in an era where we use systems of truth. 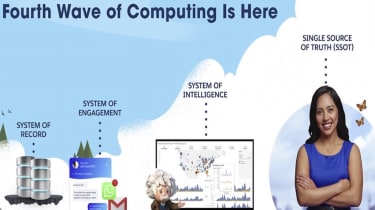 In that era, trust becomes ever more important, he said, as a precursor to unveiling Salesforce Customer 360 Truth. Launching the product during the “trust revolution”, the cloud giant hopes to enable its customers to better understand their customers by using a single source of trusted data to personalise and enhance their experience.

Building on the theme of trust, Salesforce also took its strategic relationship with AWS to the next level. The extended partnership, which aims to ensure call centre operatives deliver exceptional customer service, sees the marriage of the number one CRM provider with the number one public cloud provider, according to the firm.

Salesforce also cemented another partnership during Dreamforce, this time with fellow tech giant Apple. On day one of the show, the companies jointly announced the launch of two new flagship apps: a redesigned Salesforce mobile app and Trailhead Go to make it easier for people to learn on the move.

Elsewhere on the agenda was the issue of voice – both technologically and at a human level.

The launch of Einstein Voice Skills is designed to mirror what has happened in the consumer world with things like smart speakers and digital assistants. Our fondness for voice interaction has made home life easier and Salesforce hopes it can do the same in the business world.

Equality and inclusion also remained a key focus and the conference had many speakers helping to bring home the message that everybody has a voice that matters. They also stressed the importance of having a diverse workforce as a key driver not just of equality but of success.

Sustainability was also a key thread with energy provider ENGIE talking about how it is using cloud to help become part of the climate change solution rather than part of the problem.

Ultimately, Dreamforce was a showcase of bright minds – those on stage, those who sat watching and those walking around – and an even brighter future if we all work together in the right way. Indeed, the idea of togetherness was definitely highlighted in co-CEO Keith Block’s talk just before the opening keynote.

“We are a company that is doing things the right way. By doing well and doing good, together,” he said.

So as one door closes on Dreamforce 2019, another one opens ready for the planning that is Dreamforce 2020...

#DF19 may only last four days, but the memories last a lifetime. Let the countdown to #DF20 begin! 😎 pic.twitter.com/TXV4Hp1dOb