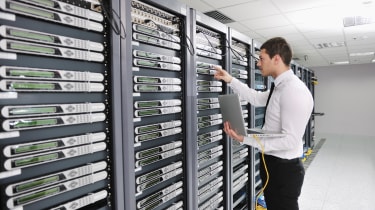 The analyst firm said cloud IT infrastructure spending declined for the second quarter in a row in the third quarter of 2019, down 1.8% from the same period last year.

While public cloud infrastructure declined 3.7% on the year, that segment is still worth $11.9 billion in quarterly sales. And while sales for public cloud dropped versus the same period last year, they were up by 24% from the quarter before.

"As the overall segment is generally trending up, it tends to be more volatile quarterly as a significant part of the public cloud IT segment is represented by a few hyperscale service providers," IDC reported, adding that public cloud makes up most of the spending.

With such volatile quarterly figures, it's easier to look at the market on an annual basis, and IDC noted public cloud IT infrastructure had stable growth since the analyst firm began tracking the segment. "In [the third quarter of 2019], vendor revenues from private cloud environments increased 3.2% year over year, reaching nearly $5 billion. IDC expects spending in this segment to grow 7.2% year over year in 2019 to $21.4 billion," the company predicted.

The future is now: How to jumpstart your journey to the cloud

A guide to delivering customer expectations through technology

IDC splits infrastructure into three areas: ethernet switches, compute platforms, and storage. While compute will remain the largest segment for cloud infrastructure spending, it's expected to see growth of just 3% in 2019, while storage will be flat. The Ethernet switches segment is predicted to climb 11% on the year.

IDC forecasts traditional infrastructure will make up 42% of sales by 2023, down from 52% in 2018. That's in part due to spending on traditional environments declining, with IDC predicting it to fall by 5.3% over 2019.

"This share loss and the growing share of cloud environments in overall spending on IT infrastructure is common across all regions," added IDC. "While the industry overall is moving toward greater use of cloud, there are certain types of workloads and business practices, and sometimes end user inertia, which keep demand for traditional dedicated IT infrastructure afloat."