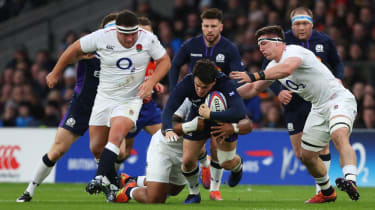 The Six Nations rugby tournament is expanding its partnership with AWS to add live in-game analytics during this season's broadcast of the competition.

Fans will be placed "at the tactics board", according to AWS, with five new statistical features that analyse key segments of the game.

This follows on from the 2019 Championships, where AWS technology provided fans with insights into scrummages, play patterns, try origins and team trends with statistics generated by data gathered during the games. This is streamed and analysed by AWS platforms like SageMaker and then delivered as insights back to the live TV broadcasts.

"The introduction of the advanced statistics – powered by AWS – in the 2019 Guinness Six Nations Championship was just the start of how we are planning to change the game of rugby through advanced in-game analytics," said Ben Morel, CEO of Six Nations Rugby.

"This year will see the introduction of even more engaging and informative stats that bring fans even closer to the action. With these innovations, together with AWS, we are seeking to significantly enhance the viewing experience for all rugby fans by providing them with unique data-led insights."

These have been developed in partnership with data analytics firm Stats Perform and the Amazon Machine Learning Solutions Lab (as well as SageMaker). One of the first new features will be a heatmap of the pitch that illustrates where most of the action is taking place. This will also "visualise" where a team is turning over possession, according to AWS.

Tackling will also be analysed with machine learning models that will map out the location of success and highlight areas that should be exploited. Fans will also be able to "visit the 22" with insights into how successful a team is at entering the oppositions 22-metre area. This will be calculated for every phase of play, with the aim of gaining deeper insight into how long a team stays in the attacking area, how many opportunities it creates and how many it converts.

When it comes to conversions, kicks from the side of the pitch are extremely difficult and with AWS Kick predictor, machine learning will inform fans just how difficult they are. According to AWS, the calculation happens in real-time, during a break in play while the kicker sets himself up. It takes into account a number of real-time, in-game factors, such as the location of the kick, the period of the game it's being taken, the current score and if the kicking team is playing home or away.

Additionally, it analyses other historical data, for example, the average success rate of the kicking player in the given field zone, during the Championship and during the player's entire career.

This is very similar to the NFL Next Gen stats platform that predicts the likely success of passes from a quarterback. It also further expands AWS' portfolio of sports partnership after its recent deal with the German Bundesliga and its deep ties with Formula 1.