Next-gen business collaboration tool is now available to users, including a basic version for free 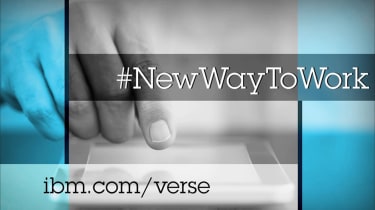 Verse is a new collaboration tool that combines email, social media, calendars and more into one tool, which aims to overhaul email and aid productivity for SMBs and the enterprise.

Back in January, Big Blue announced it would make available a freemium model of Verse to users worldwide before the end of Q1, though with limitations on storage space and other capabilities.

"One of the few things that have changed with email over the past 30 years is the amount of messages being sent and received," said Jeff Schick, IBM's general manager of enterprise social solutions.

"Businesses are sending upwards of 108 billion emails a day and people just can't keep up. Verse combines things like email, calendaring and file sharing with analytics to provide a system that learns who and what are most important to you."

A beta version of the tool was released in November 2014, and Ronnie Maffa, vice president of development and IBM Collaboration Solutions, told IT Pro that feedback had been "quite positive."

"We have gotten feedback for the colouring, the intention of what we're trying to build and for areas of feature function that individuals feel we've done well and where we might not be so perfect."

Speaking at IBM's ConnectED conference taking place in Orlando, Florida this week, Kramer Reeves, director of Product Management Messaging and Collaboration Solutions, spoke about the company's decision to offer the tool to customers for free, with no current plans to cap the number of users signing up.

Reeves said: "In terms of the freemium offering, [it] would be the full Verse capability, you'll have that Verse mail experience, but in order for Verse to really be Verse.... it's pretty clear that real-time communication and social networking services are an integral part of that offering. We're not going to neuter that in any way shape or form.

"We'll neuter the freemium model in and around [capping] file sharing and storage, mailbox size and number of emails sent, but beyond that we'll have complete full functionality because we didn't think it was the right strategy to take away capability, but just limit it in terms of that."

Verse currently has almost 100,000 users signed up for the freemium version, according to IBM. Although Kramer notes IBM predicts larger companies will opt for the commercial model to unlock extra storage space and additional capabilities such as meetings services and video/audio messaging.

"The freemium model is based on adoption in the cloud for enterprise software around the world," Reeves told IT Pro.

"The business justification around all of this is our feeling that the market is hungry for a different experience than what exists today in email.

"Nobody had really addressed the broader challenges with email, nor the improvements needed to bring some of the social tools more closely, centrally and elegantly presented to the user, so we felt doing that would open up more market opportunities for us, and as such would position us against someone like Gmail, that is free."

This article was originally published on 27/01/15 and was updated on 06/04/15 to reflect the fact IBM had confirmed availability of Verse.