A new Office for Mac, but is it worth upgrading to? 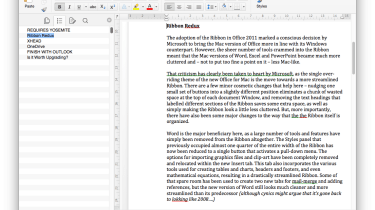 The love-hate relationship between Apple and Microsoft is clearly back in love' mode at the moment. Following last month's launch of the iOS version of Outlook, Microsoft has now released a public preview of the next version of Office for Mac. It's been five years since Office 2011 was released for the Mac, back in 2010, so this new version is certainly long overdue.

However, Office 2011 received mixed reviews from some Mac users, who saw the introduction of the Ribbon' toolbar as an unwelcome intruder from the Windows world. The Ribbon isn't going away, but the streamlined makeover that it receives in this new version of Office for Mac should ensure that it gets a much better reception from Mac users.

The adoption of the Ribbon in Office 2011 marked a conscious decision by Microsoft to bring the Mac version of Office more in line with its Windows counterpart. However, the sheer number of tools crammed into the Ribbon meant that the Mac versions of Word, Excel and PowerPoint became much more cluttered and not to put too fine a point on it less Mac-like.

That criticism has clearly been taken to heart by Microsoft, as the single over-riding theme of the new Office for Mac is the move towards a more streamlined Ribbon. There are a few minor cosmetic changes that help here nudging one small set of buttons into a slightly different position eliminates a chunk of wasted space at the top of each document window, and removing the text headings that previously labelled different sections of the Ribbon helps to make the Ribbon look a little less cluttered. But, more importantly, there have also been some major changes to the way that the Ribbon itself is organised.