More “flow” needed to prevent companies from being disrupted 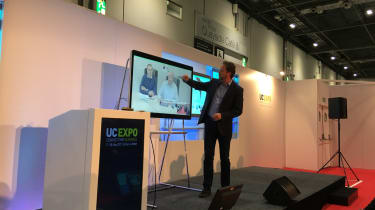 Companies will need to pick up the pace and innovate more quickly if they are to stay in business, attendees at UC Expo were told.

Speaking in a keynote speech at the Excel in London, Snorre Kjesbu, vice president Collaboration Endpoints Technology Group at Cisco said that speed counts in business and while technology in collaboration has changed remarkably over the few decades, places in businesses such as meeting rooms were essentially stuck in the 1950s. And this could have a braking effect on meaningful collaboration on innovative new products.

Collaborate and Communicate - the MUST attend event for IT professionals and business leaders. Come and hear from UEFA, GoCompare, Interoute, RingCentral, and Cisco.

He said that while meeting rooms had facilities such as video conferencing these didn't "help with the fundamentals, such as innovation at speed". Such a pace of change has executives in many firms concerned.

He pointed to a survey of CEOs around the world carried out last year by KPMG, which found that 82% of CEOs questions weren't sure if their products will even be relevant in three years' time, and one in two CEOs believed that their organisations will be significantly transformed by then.

He added that there were good tools for carrying out easy tasks by individuals and groups as well as good tools for individuals to accomplish harder jobs. But the tools needed to work on complex problems by groups were lacking in today's organisations.

He said that as far as groups of workers were concerned, "being creative is hard work, how do we help with this," said Kiesbu. He urged the CEO community to foster an environment where groups within organisations could accomplish such collaborative projects."

"We need a new way of working. It's about working in teams, having access to information," said Kiesbu. "It needs to be a consumer-like experience."

He warned that it is not enough to just come up with ideas, "you need to get things done". "There can't be islands, there needs to be a flow [of information]."

Kiesbu unveiled his company's Spark product, which looks like an oversized iPad. He claimed such technology when backed up with software, hardware and the cloud would help groups to work better on difficult projects as it allowed colleagues to have video conferencing, whiteboards and access to information.

"We need to enable teams to get to a place where they can work together," he added. "Our job is to make this work as invisibly as possible."

Collaboration and communication is at the heart of making your business more efficient. Find out about the great speakers and agenda we have lined up at Collaborate 2017. Register now for an early bird discount.