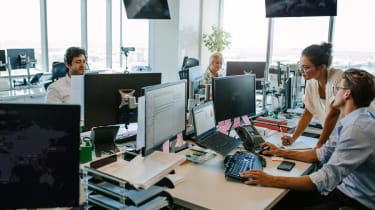 Kevin Hanley, head of innovation at RBS, mentioned the bank is Facebook's biggest user of Workplace and that it's harnessed the collaboration tool as a way to drive cultural change within the organisation.

"We're moving away from an email driven culture which is hierarchal and cascade driven and a tell driven culture to something where we use enterprise tools such as Facebook's Workplace ... to drive a much more collaborative, non-hierarchical, cross-functional culture within the organisation which I think is part of the how do you solve the cultural challenge that large organisations have," he said at a London roundtable event today.

Hanley made the comments when speaking about a new survey from Dell EMC, which found 71% of business leaders are aware their organisations are under threat from digital transformation, but don't take digital disruptors seriously.

Vanson Bourne conducted 500 interviews across the UK with people from large companies, finding that organisations are failing to prioritise the competitive threat from agile startups in their markets.

"The world is changing at an unprecedented rate. Technology is becoming faster, cheaper, more ubiquitous and as that technology is placed in the hands of our customers their demands are changing where customers are becoming ever more expectant," said Hanley.

He underlined that the banking sector is about to undergo a major change.

"For the last 300 years banks have owned the end to to end value chain as we call it, now we're moving to a world where all the links in that chain are being broken so the business of banking is being broken into small pieces and every one of those small pieces can be done by non-bank service providers," he said.

Andy Jackson, manager at Entrepreneurial Spark, a nationwide business accelerator, said corporate businesses suffer from having too many resources as it slows down their capacity to be innovative.

"It's really dangerous for you to have lots of money when you're starting out a business, because you'll just build a plan that spends the money to prove a concept that may not work. It's much better to have zero resources and then you can get really innovative," he said.

In contrast, the startups he works with need to be disruptive around their ideas since they don't have a choice; they aren't able to spend money on lots of resources, which forces them to think lean instead.

"They make decisions really fast and as such they are data-driven, they have to go back and they measure everything, they look at what they're doing, they're establishing the kind of feedback and responses that they're getting having tested everything often," he said.

"It's always based on a big vision, what is it that they're ultimately trying to achieve and why did they get into it in the first place."

Claire Vyvyan, senior vice president of commercial UK&I at Dell EMC, said: "That pace of digital disruption, the speed at which change is happening is getting faster."

"We were worried about the UK economy and actually the research does show a little bit we are behind the rest of the G8 nations in terms of digital disruption and awareness of what's going on."