WWDC 2018: Nine things you might have missed from Apple's annual developer conference

The most interesting WWDC announcements, from 'digital health' on iOS 12 to Dark Mode on macOS Mojave 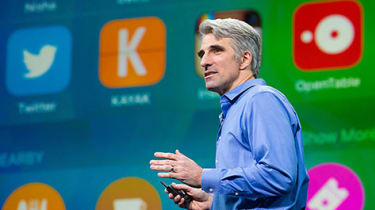 So the rumours were true: no new hardware at WWDC 2018. Instead, it was all about software. We've broken down the specifics of iOS 12, watchOS 5 and macOS Mojave on their respective pages, but here we're corralled the standout announcements from across the event. From Memoji to iOS apps on Mac, here are the main things to take away from this year's WWDC.

1. iOS 12 wants you to control your screen time.

Apple says it has been listening to people's concerns about smartphone addiction, and with iOS 12 users will be able to set themselves limits on specific apps. As the timer approaches zero, the iPhone owner will be able to extend it if they wish, but they'll still get handy reminders and graphs showing their time, broken down by app and type.

For families, this feature can be implemented remotely, letting parents lock down apps at certain times, or give them limits for the day while maintaining access to essentials, like educational apps and the phone.

As well as introducing four new Animoji (Tiger, T-Rex, Koala and Ghost), Apple introduced Memoji, where users can design their own emoji with the same gurning potential as regular Animoji. If you've ever wanted to create a grinning cartoon version of your face, your chance will come this autumn.

iOS 12 will now allow up to 32 people simultaneously and yes, you'll be able to use those new Memoji in conversation. Here's Tim Cook's effort...

People in the conversation will automatically have their face surfaced as they make noise, meaning it should be simple to keep track of who's speaking amongst the crowd.

4.Your Apple Watch will know when you've started to exercise

The new version of the OS for Apple Watch brings some extra niceties for the fitness side of things. Not only will it now tell you extra stats like your cadence and the speed of your last mile, it will buzz you if your pacing is wrong and be able to detect whether you've started or finished early so no exercise is lost.

Most usefully, your Apple Watch will be able to tell when it thinks you've started exercising and will ping you an alert to start recording a session. If you've notbeen working out... well, you may want to start thinking about your resting heart rate.

5. Turn your Apple Watch into a Walkie-talkie

With watchOS 5, you'll be able to pick out favourite contacts to send one-on-one recorded messages, wrist-to-wrist over 4G or WiFi.

6. You don't need to get Siri's attention anymore

Just raise your wrist, and Siri will start listening. Apparently, that gesture alone is enough of a sign that you want to speak to Apple's digital assistant.

7. MacOS is leaving the mountains

Apple's Craig Federighi revealed that the next version of MacOS will be Mojave, and promised "striking changes" the first of which is a Dark Mode, replacing the bright colours of your desktop with a stylish black to make late-night computing easier on the eyes. Mojave also comes with automated 'stacking' of files in categories and tweaks to Finder to make it easier to edit documents.

8. Apple is cracking down on "Likes" and comment tracking

This extends to making it tougher for data companies "to uniquely identify your device and track you". They won't be able to track you from identifiers like fonts and system configuration, we're told. An example given on-stage even pulled a screenshot from a Facebook comment thread, in case you were in any doubt about Apple's target.

Coming in 2019, Apple is introducing parts of UIKit to Macs alongside AppKit. In layman's terms, this means it will be a lot easier for developers to port their successful iPhone apps to the Mac App Store... Before then, Apple will start to rollout Mac versions of several of its own iOS apps: News, Stocks, Voice recorder and Home.

WWDC, Worldwide Developer Conference, or Dub-dub DC', is Apple's yearly conference aimed at, you guessed it, developers. It's a week-long event with a focus on software, kicked off with a keynote that tends to include a handful of big announcements.

While the yearly September event is when Apple unveils its latest iPhone, WWDC throws the spotlight on the company's upcoming software updates.