Welcome to the age of the platform 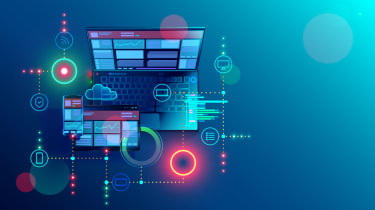 It's hard to argue against the idea that Dropbox has been a hugely influential company. It's synonymous with consumer cloud storage and was one of the first companies to popularise the concept. In many ways, it was instrumental to the growth of cloud computing as a mainstream technology.

Now, however, it's changing tack and reinventing itself. No longer content to merely be the place where users and teams store their documents, the company wants to become the connective tissue that links all the digital elements of your working life. As founder and CEO Drew Houston puts it, he wants Dropbox to move from the filing cabinet to the boardroom.

In Houston's view, work revolves around content; whether it's contracts, proposals, timesheets, web pages or blueprints, files are the one constant within every business. With that in mind, your filesystem should be at the heart of your workflow. This is fundamentally what the newly-redesigned Dropbox is all about: using your files as a jumping-off point for collaboration within the organisation.

"We see no shortage of opportunity to help kind of build this workspace that organises itself, that lets you use any of the tools you want to use. But instead of being organised around the concept of messaging, we think the starting point is really around the content," Houston tells me.

"What are people talking about when they're in Slack? It's usually content that lives in Dropbox. Or like Salesforce; the salesperson's day revolves around content that lives in Dropbox, because they're getting a proposal together, or they're getting contracts signed. They're round-tripping with Dropbox all day. And if instead of having to jump from back and forth, if we can smooth that over, that's really valuable."

The app now boarding at Platform One

It's fundamentally a platform play. Houston wants Dropbox to be the first thing workers open when they get to their desk and the one they come back to most regularly throughout the day, maximising the amount of time spent in the app and minimising time spent outside it. In order to do that, the company is pursuing a number of integrations with other services such as Zoom, Slack and Jira, which will allow users to take actions within those services without actually leaving the Dropbox app.

"A lot of this fragmentation in the end user experience, IT is also experiencing," Houston says. "We see a big opportunity to help them kind of wrangle all the different tools that their employees are bringing in and help them get some semblance of control, and visibility back."

"We want to occupy a little bit of different space and people's minds, from just being a passive content repository to being the living workspace where you get things done. So moving from the filing cabinet to the conference room, where the difference is, you can still have stuff and content, but then you see people and you can have conversations and you can be up on the whiteboard."

Dropbox is far from the only company doing this; virtually every other business cloud company is pursuing a similar strategy. Salesforce, Box and even Slack itself have been opening up app stores and bolting on integrations left and right in an effort to make their applications as much of a one-stop-shop for their customers' needs as possible.

Collaboration has also been a key focus for these companies, incorporating messaging, sharing and other communication functionalities into their products. For some, like Microsoft and Google, this takes the form of integrating their storage platforms with full-blown unified comms solutions or collaboration suites like Teams and Hangouts. For others (including Dropbox), it's comments and activity tracking.

All this is a clear indication that 'just' doing cloud-based file storage really isn't enough of a differentiator any more. Businesses now require a level of added service, whether it's curating and cataloguing files or helping businesses seamlessly integrate those files into broader workflows, customers expect their storage platform to help take some extra hassle out of modern business.

The benefit of this shift is a potential increase in customer choice and flexibility; you can use Office 365 for its excellent productivity software, but you can also use Dropbox to store your content without being locked into OneDrive, and use Slack for messaging without having to stick to Teams. As these platforms grow in maturity and their integrations grow deeper and more plentiful, businesses will end up with the ability to combine them in whatever way works for them.

On the other hand, this proliferation also runs the risk of increased fragmentation and creep. Without careful management, organisations could easily find themselves with multiple different collaboration and filesharing platforms, all performing nearly identical roles and with content scattered between them. Cost models and licensing also have to be carefully monitored, lest organisations find themselves paying for multiple platforms that fulfil the same role.

These problems can be solved, though. The answer is deep and genuine collaboration between tech companies, such as using machine learning to detect when a file is shared in a Slack channel and automatically uploading it to the relevant Dropbox folder, or Microsoft and Dropbox jointly offering co-branded packages of Office 365 software and Dropbox storage. These ideas might seem unrealistic, but the growing trend towards cooperation and partnership within the tech industry means they're not as outlandish as they might once have been.

"We're thinking excitedly about these opportunities," Dropbox's group product manager John Hrvatin tells me. "When you're talking about productivity tools, that data is housed in these silos, and that's why you end up having to have 10 search boxes. But we're going through the effort of creating these partnerships with these key partners, because we want to break down those silos. Just the user experience of joining a meeting, or sharing a file, or managing a Trello board [from Dropbox]; just that is user benefit. But search is the other thing that we can fix with these partnerships. And there really isn't a good way of doing that unless you build [them]."

Once tech companies figure out a way not just to co-exist but to genuinely collaborate, a world of possibilities opens up. Imagine a system where every single tool or piece of software you use was genuinely and deeply connected; where one search bar allowed you to simultaneously search your cloud storage, emails, hard drive, Slack workspace, Github repos and every other tool besides. Imagine if machine learning and OCR could work together to automatically title, tag and organise files no more vague titles like 'proposalV3.doc' or searching through 18 sub-folders because someone's mis-filed a crucial document.

These sound like utopian pipe dreams, but it's all technically feasible. All tech companies have to do is stop trying to beat each other to the finish line and start helping each other and if Dropbox's latest pivot is anything to go by, that might happen sooner than we think.

"We're really at the beginning of that journey," Dropbox CTO Quentin Clarke says. "But we're actually uniquely positioned here, because of our neutrality, because we're so committed to being a system player, we're going to have access to information because of these integrations with zoom, Slack, etc that no other players will even have. So our ability to make something good of that using machine learning is actually super high. And that's something I think you should keep an eye on over the coming months and years as we continue to roll out on top of this foundation."