View from the airport: Boxworks 2019

Box was the host but the partners were the real stars 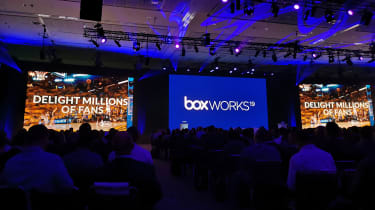 As I leave San Francisco International Airport, with Boxworks 2019 all done and dusted, I'm struggling to think of what was actually showcased this year, because it certainly didn't feel like Box had anything "new" on offer.

The two big announcements from the cloud firm made were Box Shield and Box Relay, two products that were actually launched well before Boxworks. The actual "new" parts were integrations with partners.

These partners, some of the biggest and brightest in tech, proved to be the real stars of the event. Boxworks felt more like being in the audience of a chat show, which is due at least in part to the charm and wit of CEO Aaron Levie.

"I think if you spend $35 million buying anything, you can talk about it all you want," he joked when IBM boss Ginni Rometty asked if it was okay to bring up the acquisition of Red Hat. This was one of many big laughs he earned during the two-day event, quipping his way through keynotes and panels. He may be the boss of a huge cloud firm, but he has the knack of entertaining an audience while getting details out of guests that's more common from the likes of Graham Norton or Ellen DeGeneres.

While he joked, he also let Rometty discuss the Red Hat deal, arguably one of the biggest acquisitions of the last two years. She talked about how it has changed the way IBM approaches work. From there, Big Blue's CEO touched on data ethics, automation and the future of work.

IBM featured heavily in the announcements for further integrations and features for Box Shield and Box Relay, with Watson AI integrations. These now offer its users greater security and more efficiency with data and content sharing.

The companies taking these services in and running with them are collaboration and productivity outfits Slack, Zoom and PagerDuty.

"Do you believe that Skype and Microsoft Teams is providing a better experience than Zoom and Slack?" Levie said during a press briefing. "The answer is no in my opinion because I think that Skype only works half the time. I'm going to bet on the world's best communication tool with Slack and the world's best video tool, which is Zoom. And I'm going to bet that those experiences iterate at a much faster pace."

Microsoft may still be winning in terms of user numbers compared to Slack, but the fact it's bundled into the company's Office 365 productivity suite has undoubtedly given those figures a boost. Slack, meanwhile, is a standalone platform and one that's seen rapid growth in the past few years from a little-known startup to a major force in the world of business messaging apps.

During a press panel, Slack's CEO Stewart Butterfield spoke about the "deathly silence" that the company's staff work in when in the office. He said visitors were "perturbed" by the quiet and people seemingly chatting via the app to others next to them rather than talking, but they were actually being inclusive. A small part of it, he admitted, might be introverted engineers, but largely its people conversing with colleagues who aren't in the room, keeping them abreast of the details in channels. These channels become transcripts for people not there to catch up with a day or week later, he said: Not so much an 'always-on' culture but more an 'always-available' one.

This is just one example of how these companies have changed the way offices work. Box helps this along, providing the tools and security to share documents, and championing these disruptive startups. While the company didn't have lots of new products to showcase itself for 2019, its partners did. The next twelve months could be really big for these companies but will have to wait til Boxworks 2020 to see just how well they do.