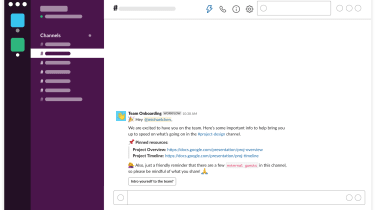 Slack has introduced Workflow Builder, a tool to create a customisable channel within a channel.

This, the company says, will remove productivity "roadblocks" by streamlining projects within Slack.

It's been a busy year for the communications platform, with new productivity features launched every other month, such as tighter security controls and user-friendly upgrades such as dark mode.

Here, the company is going after workflow productivity with a feature that enables users to get information from their team sent straight to them, instead of creating an extra, temporary channel.

"Raise your hand if you rely on other people and teams to get work done," Slack rhetorically asked in its blog. "By our count, there's a 70% chance you do. Coordinating projects with others requires getting the right information to the right people in real-time. Yet steps like making requests, asking for updates, and providing context to teammates are hardly instantaneous and often halt progress altogether."

Slack's answer to this is Workflow Builder, a "visual tool" for users to automate routine functions with custom workflows essentially a channel within a channel to collect specific requests for your projects.

Slack uses a new starter as an example, where rather than tracking down the relevant people, whom you might not know yet, or trying to find specific documents relating to a project they're now on, Workflow Builder provides a quick and accessible repository where the newbie can get up to speed.

Alternatively, the organisation can set up a "welcome workflow" that allows the new person to fill out a form letting the rest of the team know about them, which is one way to cut out awkward getting to know you chit-chat.

These custom forms are also a way of working out what your channel's needs are. For example, finding out everyone's thoughts on team meetings: Each member can fill in the form and let each other know about their availability and so on.

This is also useful for incident reports, recording issues with your company's website for instance, where you let the team know something's wrong and you create a shareable file of the issue for the IT department.

This is also a very quick feature, requiring just a minute and a reasonable amount of clicks (it took us only five clicks to create our own workflow).