CherryBot interacts with supporters depending on how they're feeling 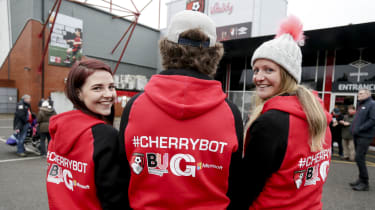 AFC Bournemouth have introduced a chatbot built on Microsoft Azure's AI to interact with the club's fans by gauging their emotional states.

Launched ahead of the Cherries' fixture against Liverpool last month, CherryBot interacted with 1,150 fans via Facebook, who send a total 19,200 messages - and 400 selfies - between them.

Alongside Microsoft, digital agency Greenwood Campbell and Bournemouth University were also involved in the project.

"I am delighted at the response from our supporters," AFC Bournemouth commercial director, Rob Mitchell, said. "As a club we are always looking to embrace new and emerging technologies and to have so many people interacting with it, in the form of questions and selfies, can only be a positive sign."

The chatbot uses Microsoft Azure's AI cognitive services to adapt content according to how it thinks the user is feeling, offering video highlights and interacting with them using conversation adapted to their responses.

With Bournemouth losing 4-0 to Liverpool, fans may have been feeling rather low, but the project was still hailed a success.

"CherryBot has been an exciting project to be involved in and it's great to see the latest edition to the squad being so well received by AFC Bournemouth fans," Jamie Dalton, technical evangelist of Microsoft UK, said.

"Using Microsoft Azure AI cognitive services, we're delighted to see how CherryBot engaged and entertained fans on matchday. We look forward to working with AFC Bournemouth and Greenwood Campbell to roll out additional functionality for fans in the coming weeks."

The next stage in CherryBot's development is to add other features and enhancements and potentially roll it out at every fixture the team takes part in.