Are we in the midst of a cyber war? 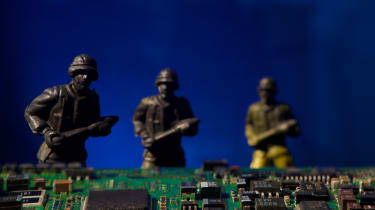 If there's one thing the security community enjoys talking about more than the latest ransomware attack or the potential of a (witting or unwitting) insider threat, it's cyber warfare.

I've spoken and written innumerable times about incidents of suspected state-level attacks, with the 2007 DDoS attack that knocked out swathes of Estonian infrastructure being one of the most notable, as well as the BlackEnergy attacks in Ukraine ten years later.

The rhetoric has always been fairly apocalyptic - attacks that could take out the National Grid, cut off access to clean water, crash trains and planes. Crises on a par with a natural disaster or, indeed, conventional warfare.

While what happened to Estonia and Ukraine was no joke, cyber weapons are often more insidious. Stuxnet, long thought to have been a joint development by Israel's Mossad and the American Department of Defense, quietly and covertly sabotaged Iranian nuclear facilities for at least a year before its existence became public.

Indeed, the less explosive nature of cyber warfare has made it more attractive to some global leaders, as we recently found out care of US president Donald Trump.

It's alleged that the US launched a cyber attack on Iranian weapons systems on 18 June rather than using ballistic weapons. While there's been no official comment on the cyber strike, Trump has publicly said he pulled out of using conventional weapons when told doing so could kill in excess of 150 people.

Indeed, Splunk's SVP of security markets told CNBC the move was "game changing" and could remould "how we think about geopolitics".

And herein lies the rub. The information security industry, political talking heads and indeed journalists have all expected cyber warfare to be like something out of film or TV. Suddenly, our national infrastructure is crippled and people die en masse of cold or heat, from cholera and e.coli. The lights go out and never come back on again. 24-hour rolling news grinds to a halt.

This is certainly more exciting to write and talk about than cyber warfare as a way of saving, or at least minimising, loss of life. But perhaps it's not so bad if that, rather than a Terminator-style scenario, is the reality.