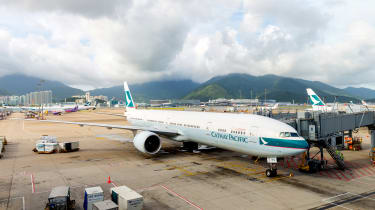 Chinese airline Cathay Pacific has admitted to being victim to a massive data breach, thought to have resulted in the loss of information belonging to as many as 9.4 million passengers.

Suspicious activity was first discovered in March, and the airline said that it has taken immediate action to investigate and contain the event, but stressed that it had no evidence that any personal information has been misused.

"We are very sorry for any concern this data security event may cause our passengers," CEO Rupert Hogg said in a statement. He added that the airline is in the process of contacting affected people.

"We have no evidence that any personal data has been misused. No-one's travel or loyalty profile was accessed in full, and no passwords were compromised," he added.

Cathay Pacific said it had notified the Hong Kong Police and is also "notifying the relevant authorities".

Randy Abrams, senior security analyst at Webroot, told IT Pro that airlines appear to be an increasingly popular target for cybercriminals. In recent months, Air Canada and British Airways have both suffered breaches. Although the company is based in Hong Kong, it's dealings with European customers place it in the firing line for GDPR enforcement.

"The Cathay Pacific breach disclosed a feature-rich set of data, including more than 40 times more passports than the Air Canada breach, meaning it will have a much greater impact on passengers," he said.

"In addition to the reputation cost, Cathay Pacific may face costly GDPR repercussions due to the amount of time that passed between the discovery of the breach and reporting it to the public."

Ed Macnair, CEO of CensorNet, told IT Pro that what is concerning with this breach is the fact that the issue was first identified in March and confirmed in May, and yet Cathay Pacific is only now making it public.

"Given that the data stolen included passport details, travel itineraries and some payments information even if only for a small number of people the airline should have immediately informed those affected, allowing them to act quickly. While it might seem disparate, hackers can use a combination of the data stolen to build up a picture of someone, which can lead to identity theft and other serious problems for individuals," he said.