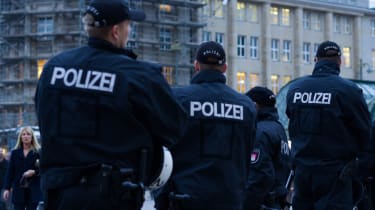 A teenager is being questioned by German police over his possible involvement in the massive data breach that led to data belonging to the country's politicians and celebrities being leaked online.

The 19-year-old, known only as Jan S, is being held after a raid on a house in Heilbronn in south-west Germany, in which police were said to have removed an unspecified quantity of computer equipment and the contents of rubbish bins, according to the Guardian.

Germany's state broadcaster, ARD, reported that the teenager was questioned "for several hours" as a potential witness. Jan S has denied he was behind the hack, but has claimed to know the real identity of the hacker "Orbit", who claimed responsibility on social media.

The leaked data, which was first published over the Christmas period but only discovered last week, is said to contain personal phone numbers, correspondence, credit card details belonging to hundreds of political figures, including Chancellor Angela Merkel, and internal documents belonging to Germany's political parties.

This was eventually leaked across Twitter in a style similar to an advent calendar, with fresh information being revealed each day.

So far it's unclear where the data was originally sourced from, but the incident is believed to be the biggest data breach in German history.

Jan S is said to be employed within the IT industry and claims to have been in contact with Orbit for some years through an encrypted messaging service, but that account has since been deleted.