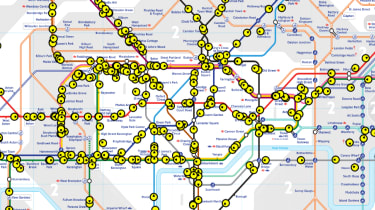 Open data has a number of interesting use-cases in sectors such as healthcare, business, banking and property, but for an immediate, visual representation of the possibilities that open data unlocks, look no further than this live map of London's tube network.

Built by Birmingham-based programmer Matthew Somerville, the map uses data from TfL's open API to track trains in real time as they move around the London Underground network, including data on which direction the train is travelling, which line and route it's on, a unique identifier and how long it will take to reach the next stop.

The latest version of the tool maps the paths of the trains to the classic London Underground map designed by Harry Beck in 1931, The original version - created by Somerville as part of a science hackathon in 2010 - is a geographic representation of their network, overlaying the trains' real-world paths over a map of london.

The system works by using data from the TfL API and then doing, in Somerville's words, "a bit of maths and magic". This API data is the same feed used by apps like Citymapper and Google Maps to offer up-to-date departure times and tube status updates for commuters.

In addition to his real-time tube map, Somerville has also used TfL data to create live maps for London buses and National Rail trains. While the system isn't entirely perfect - Somerville admitted that the trains don't always precisely follow the lines and gaps in TfL's raw data feed mean that data for some of the stations on the Circle and Hammersmith and City line are missing - the project offers a mesmerising look at the kind of creativity that open data can enable.