Smart cities: building the metropolis of the future

How cutting-edge technology is shaping our urban environments 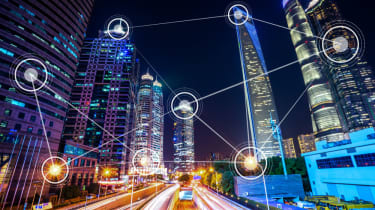 Cities of the world are buckling. The UN estimates 55% of the planet's 7 billion people live in urban areas and it's believed a million people join this list on a daily basis. Infrastructure is feeling the strain, there's unrest, congestion is polluting our lungs and crime is prevalent. What's more, if this rise continues as expected, cities will be home to some 6.1 billion people by 2050. Something has to give.

In the UK, the economy as a whole lost 8 billion due to staff being stuck in traffic jams last year, or 178 hours per driver, according to research by Inrix. As cities become saturated, authorities and industry are turning to big data and tech to ease this load. In London, for instance, Transport for London's (TfL) Open Data project provides more than 80 data feeds through a free API. These feeds share details about air quality, tube times and delays, the number of passengers flowing through the network as well as data on live traffic disruptions. Some 600 third-party apps are now being powered by these feeds, used by 42% of Londoners, and it's reported to be putting 130 million a year back into the capital's economy. On a wider scale, it's estimated that by using open data effectively, 629 million hours of waiting time could be saved on the EU's roads and energy consumption could be reduced by 16%.

"Open data is changing our everyday lives and how organisations like TfL work," said Jeni Tennison, CEO at the Open Data Institute. "Data is becoming as important as other types of infrastructure, such as roads and electricity, which means building strong data infrastructure is vital to economic growth and wellbeing."

Beyond roads, tracking pedestrians is key in keeping a city moving. In Glasgow and London, mobile phone data can be used to track passenger numbers on public transport, while sensors in lampposts can track footfall. The Netherlands has even begun trialling smart traffic lights that give the elderly extra crossing time or change automatically when they detect an approaching cyclist.

In China and Singapore, authorities are taking things a step further. Through the use of IoT devices and sensors, alongside advanced 4G data networks and AI, not only are they monitoring and improving traffic flow, they use the data to track road violations and even predict crime. Singapore, for instance, uses data from RFID-equipped travel cards, CCTV and anonymised phone data to identify problems before congestion can take hold. Its AI can spot patterns and run algorithms that highlight issues some 10 or 20 steps down the line.

Elsewhere, the Chinese province of Zhejiang is using 1,000 sensors to capture more than a terabyte of data every month. Stored on Intel servers running on Intel Xeon processor E5 series and holding an incredible 198TB, this data is easy to access and analyse by large numbers of users who can search for a licence plate on the network in less than a second, from 2.4 billion records. In particular, products such as those developed as part of Intel's Vision Accelerator Design use deep neural networks to analyse such video footage quickly and accurately.

It's not just traffic violations being caught using next-level technology and analytics. CCTV video link-ups, license plate scanning, smart mapping and even real-time facial recognition are also helping save lives, cut down on vandalism and prevent robberies. The London Mayor's Office for Policing and Crime (MOPAC) recently partnered with Greater London Authority's Strategic Crime Analysis team to launch SafeStats. By feeding more than 20 million crime and safety records from the police, ambulance, fire brigade and transport authorities into advanced AI software, emergency services can detect patterns and identify crime hotspots. This AI can even offer solutions and guide authorities on policy. For example, when cross referenced with records from 25 hospitals, it can be used to create heat maps that help steer local policing strategies and funding.

Once crime is being tackled, and transport delays are managed, cities become more attractive to tourists; another area in which big data, AI and analytics are playing a significant role. In Manchester, the Beacons for Science app lets tourists use virtual and augmented reality to unlock experiences at landmarks across the city. In London, Mastercard has been hired to produce a series of smart city initiatives including the Visit London Official City Guide app. This app taps into real-time data feeds to help tourists navigate the city, using geolocation to flag nearby places of interest and transport routes.

Elsewhere, the West of England Combined Authority was recently awarded 5 million in funding to trial a 5G network at tourist destinations in Bristol and Bath. This network complements the Bristol Is Open smart city scheme designed as a city-wide private network testbed, powered by an Intel Xeon equipped Blue Crystal II supercomputer, on which companies and organisations can test smart city solutions.

"The vision behind Bristol is Open was to see how we could make the city smarter and quicker than any other," explained Julie Snell, Managing Director of Bristol is Open. "We can offer a test network that's run on gigabit fibre. It's got everything from Wi-Fi to 2G, 3G, 4G, massive MIMO (multiple-in multiple-out), LTE and even some 5G. We also have 1,500 Wi-Fi meshed network lamp posts, allowing us to bounce signals around the city without us needing constant fibre connections."

This network, consisting of hundreds of Internet of Things connections, can help people in areas of poor connectivity get online easily, and cheaply. Data from this network can be fed into a 4K, 180-degree 'data dome' and used to track Met Office weather patterns in the region, monitor mobile usage, and record air pollution levels as part of a feasibility study by the University of Bristol. This could see the city become the first to let people identify their individual exposure to pollution, and it's a similar setup to that used by the Sensing London project which used Intel Galileo-based end-to-end Internet of Things infrastructure to measure local air quality and human activity. Beyond the sensors, Intel and Bosch recently teamed up to develop the Air Quality Micro Climate Monitoring System (MCMS) which takes the data from such sensors and uses software to measure air quality, providing councils with meaningful insight.

Looking to the future, the global rollout of 5G is expected to accelerate not only the adoption of smart city technology but its capabilities. It will exponentially increase the number of sensors, the strength of the connections and the speed at which data can be sent and analysed. Combine this with the ongoing advances in data collection and analysis, and the expansion of the IoT, and it looks like we're at a critical juncture in the pursuit of a truly connected utopia.