Commvault CEO: Our tech is “on another world” to our competitors

Hammer says Commvault has set the industry bar - one day after counting it in the same bracket as Netflix, Google and Amazon 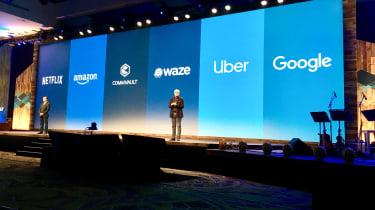 Commvault's veteran CEO has said the firm's recent advancements in areas such as AI are way ahead of the rest of the industry - one year after admitting he "completely screwed up".

Despite a recent shift to HTML5 on the company's front-end user interface, Commvault's continued use of "legacy" Java in its back-end systems has sought criticism from detractors. But CEO Bob Hammer claims the firm's coding and engineering has set a new bar for the industry.

"You have all of the Commvault customers that are maybe sitting on the Java UI, and you have all the competitors in the market talking to us about legacy," Hammer said during a press Q&A at the company's flagship conference Commvault GO.

"And I'm going to be really blunt, we're way ahead of Rubrik, Cohesity and all these guys, technically.

"They're having a real good time talking about Commvault as legacy, but we're way ahead of them on automation, on AI, on managing to the cloud, on dealing with things like cyber, and GDPR, and data analytics.

"We're on another world compared to where they are, and our Command Centre, which now has all this added automation, is well beyond what their next-generation visions look like."

Asked whether there were plans to transition backend infrastructure to HTML5, or further integrate AI, Bunte, who also attended the Q&A, said the company will continue to attack the issue with further integrations in future.

He added Commvault was "feeling really good" about its position with customers, as well as against its competitors.

Hammer added: "What we said on stage on Monday [Tuesday] was not an accident. So basically we're setting the bar, we're saying to anybody in the industry you have to reach that bar.

"The issue some of these competitors are going to have is they're architecturally-bound, it's going to constrain then in solving some of these fundamental problems, and we know that. So it's a new bar, and we've just set it." 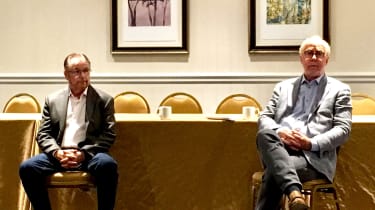 The pair's comments came a day after they put Commvault into the same bracket as such industry giants as Netflix, Amazon, and Uber for the company's aspirations to implement sophisticated machine learning and AI, and change users expectations.

"What do these five companies have in common?," Hammer said during the keynote address at Commvault GO, hosted this year in Nashville, Tennessee.

"They changed our expectations for things we do in our everyday lives. And how did they do that? Well, they applied sophisticated technology like machine learning and artificial intelligence to drive better outcomes."

The pair, who delivered a joint-address, used the keynote to highlight a number of key announcements including a new AI-powered user interface, as well as two new hardware products, and partnerships that build on Commvault's new channel-centric strategy.

For instance, the company's Command Centre, set to launch in December, uses AI and machine learning integration to slash backup times, and vastly reduce the number of notifications.

"When we started this journey, just a little while ago," Bunte concluded, "we showed you logos for five companies who are changing your expectations about almost everything you do in your everyday life.

"And like those five companies, Commvault has applied innovative technology to radically change your expectations for the things you do every day."

Hammer's words are a far cry from the tone he set at 2017's Commvault GO, in which he admitted "we completely screwed up," strategically. The firm had missed the boat on the initiative taken by one of its main competitors, Veeam, which introduced a simple application into the market.

A common criticism levelled at Commvault by existing and prospective customers had largely centred on the sheer complexity of the firm's offering.

This, during the last year, sparked a radical change in how its software was packaged, and priced - with simplicity one of the core themes at this year's conference.