View from the airport: Commvault GO 2018 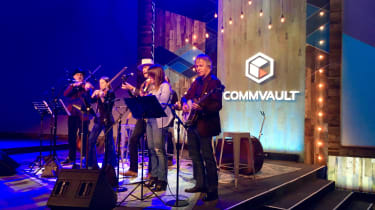 Commvault is a company in transition. While leadership questions linger, the last 12 months have seen a slew of changes at the data protection and backup firm, from a complete overhaul of its product line to a new channel strategy.

Simplification is king. And everything has come together with aplomb, as Commvault sees it. Hence its attitude going into the third annual flagship GO conference, hosted this year in Nashville, Tennessee, was buoyant.

This is because, as we learned from the 'Bob and Al show', those companies changed their users' expectations by harnessing AI, and vastly simplifying the user experience. It is precisely what the veteran duo believe they have just pulled off at Commvault, telling customers, partners, and the press that their 20-year vision is finally realised.

The biggest story to come was a revamp of its front-end user interface. After heavy criticism that its UI, product portfolio and pricing plan were highly vexing to navigate, the company's new Command Centre, which sits as an interface to its now just four products, will roll out in December as a streamlined single point of contact. The UI will also harness AI and machine learning to not just rewrite itself to fit around each enterprise's data lakes, but also slash backup times and notifications.

Elsewhere the company announced a handful of partnership extensions, especially with HPE and NetApp, that embody its reshaped channel strategy. The nine-month-long work in progress has seen Commvault move from a channel-friendly to a channel-centric company, with its channel leadership team "80% happy" with what they've achieved in the space.

GDPR, a hot topic for any and every firm, also featured prominently at GO, with a number of interesting discussion points to emerge. Take the right to be forgotten; what happens when a data subject requests their data wiped, but that data is in a backup, would you delete the entire backup, or instigate a 'delete on restore' policy to work around this?

Commvault's GDPR guru and head of data protection and governance Jo Blazey also highlighted how GDPR compliance may shift beyond what is required by law, based on consumer expectations.

Consent, for instance, is only required for a handful of processing actions. But companies may find themselves seeking user consent for everything because it's what their customers expect, and everyone else is doing it.

Uncertainty also lingers over the fate of Bob Hammer, who many expect has addressed his final GO. Despite a hunt underway to find his replacement, the near 80-year-old CEO certainly seemed bullish, with Al Bunte confirming in a press Q&A the pair had been given board confidence for three more years. But it's almost certain their time has come to an end.

Despite this, the company was keen to present itself as forward-thinking and innovative. This was embodied in a new keynote format, GOx, which saw seven industry chiefs and analysts speak for seven minutes each, including presentations from Microsoft Azure and HPE.

It was engaging enough, but the subject matter, which centred mostly on different aspects of AI implementation, warranted a much deeper-dive than seven minutes would allow. A live band playing country classics as delegates wandered into the main conference hall each morning, however, was a smash hit.

As Commvault's third annual flagship conference drew to a close, the messaging centred on a handful of ideas. These include simplified products and pricing, giving customers a broader understanding of their data, quality not quantity when it comes to alliances and channel partners, and implementing new technology, such as AI.

Call it confidence - call it arrogance - but the data management and backup firm certainly feels it's set a technological standard for the entire industry, and moreover, that it's finally cracked the code to catching up with its competitors.