View from the airport: Commvault GO 2019

Despite a rocky year, fresh ideas and vision gives Commvault a second lease of life in Colorado 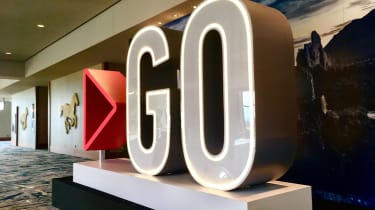 Data and backup specialist Commvault devoted a large part of its annual GO conference redefining itself in the eyes of its partners and customers. Inevitably, there was a lot of buzz about what this 'new Commvault' actually meant.

The first and most obvious part of that mission was the company's subtle rebrand, something it clearly hoped would serve as the signifier of a new chapter, and a move away from the recent stagnancy into which it had slipped. With slight changes to the colours and typeface - it improves the aesthetic somewhat. I have to say, though, it was a little underwhelming.

The second, more important aspect, was to use the event to address the growing unease among customers and partners. Our discussions with partners, by and large, suggest this was a moderate success, and there was certainly a sense of energy lacking in Nashville last year, beyond that emanating from the music scene.

This excitement was perhaps encapsulated most by the launch of Metallic, a standalone software as a service (SaaS) venture that pointedly departs from the Commvault brand and forges its own identity. I wasn't the only one confused as to why Metallic wasn't released under the wider product umbrella. The rationale was that it grew from within the company like a startup, with its own dedicated team, and that certainly adds up. Yet, reading between the lines, it's clear the firm recognises it has work to do in addressing a set of issues tied to the Commvault identity.

Connotations that its technology is hard to use, that pricing is too high and confusing, and that Commvault itself is something of a throwback compared to the new kids on the block, are - as one partner put it - three fairly "crippling" attributes. This isn't to say Commvault hasn't moved to address these, with Mirchandani stressing numerous times the 'complexity' notion is a "myth" that he's now striving to bust, given recent changes to the platform.

The firm as a whole must now face the reality of the hand it's been dealt. It's good, then, that we saw evidence of a strategy that could pave the way for a change in its fortunes. Recent changes to its channel programme, and new hires in the form of industry veterans Mercer Rowe and Edison Peres, should go some way towards addressing the barriers resellers face.

The new venture, Metallic, of course, smacks of a gimmick, but it actually addresses a gap in the market, and seemingly trumps alternative SaaS backup options. Its distribution, too, will be entirely channel-led, starting with select US partners, with successes fed back into Commvault's existing programme.

Moreover, the broader idea to integrate data management with storage management was the real cornerstone of Mirchandani's long-term vision. Following the Hedvig acquisition last month, Commvault laid out its ideas for the future, but we'll have to reserve judgement on this front until a solid model for integration is released.

Broadly speaking, these sorts of ideas and announcements were what I expected to see from Commvault after a shaky 12 months; something shiny to get the conversation going, but reinforced with a sense of substance that partners, who deal with the technology day-in and day-out, can shout about too.

Recognising the realities of an increasingly multi-cloud landscape was reassuring, as was Mirchandani's statement that Commvault is happy to work with existing Hedvig customers who use rival backup services, such as those offered by Veeam. It must be said that there's a risk that Commvault's confidence, as it follows through on its strategy, may again slip into a familiar sense of complacency.

Persistent repetition, for instance, that Commvault sat at the pinnacle of the Gartner magic quadrant, as well as Forrester's equivalent, grew fairly tedious. After all, Commvault's standard of technology has never been a problem, rather, it's the many elements that coalesce around it.