Mark Zuckerberg at Congress: Why, when and where to watch 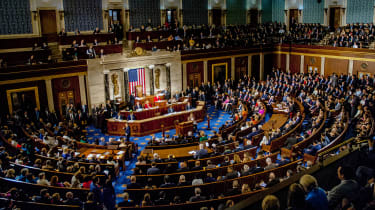 Life, as the meme says, comes at you fast. Just 17 months ago, Mark Zuckerberg was saying the idea that Facebook could influence an election was "pretty crazy" -- this week, he'll be in in Washington giving evidence into how an analytics firm allegedly used it for just that purpose with astonishing consequences.

Although Mark Zuckerberg has said he won't be gracing UK parliament with his presence (as a US citizen, the government can't compel him to turn up, so it should be no surprise that he has turned down the invite), in the US, it's a different story.

So when is Zuckerberg going, what's he going to be grilled on, and how can you watch? Read on to find out.

Why is Zuckerberg testifying before Congress?

The Cambridge Analytica scandal has now, by Facebook's own estimates, likely reached 87 million Facebook users worldwide - of which over 70 million are said to be US citizens.

You can read more about the background of the Cambridge Analytica saga here, but the briefest summary I can give is that Facebook allowed an app used by 270,000 people to lift personal data from 87 million accounts. This data was sold to a company which then used the psychological profiles to help political parties boast their election chances by targeting messages likely to strategically boost or suppress voter turnout, and the company has boasted of its involvement in getting Trump elected in undercover footage.

The loophole used was closed in 2015, but some argue this is shutting the stable door after several generations of horses have bolted. Thus Zuckerberg has some questions to answer, and he'll be doing so this week.

What is he likely to be asked?

Zuckerberg has already given his version of events over a number of blog posts, but it still leaves some questions unanswered. If lawmakers are paying attention, journalist Carole Cadwalladr, who originally broke the story for The Observer, has some fine suggestions. These include:

Has Zuckerberg been prepared?

Mark Zuckerberg isn't a hugely public-facing figure, and when Facebook has answered to lawmakers, it has tended to send surrogates. Indeed, Zuckerberg originally hinted he'd try to send someone else, saying: "What we try to do is send the person at Facebook who will have the most knowledge. If that's me, then I am happy to go."

Evidently, Congress would not be satisfied with someone else, so it'll be Zuckerberg facing the political scrutiny. As such, he's apparently been preparing. The New York Times reports that the company has "hired a team from the law firm WilmerHale as well as outside consultants to coach him on questions lawmakers may ask, and on how to pace his answers and react if interrupted." The report also mentions that Facebook has been putting on "mock hearings" with its communications team and outside advisors role-playing members of Congress.

When will Zuckerberg be testifying?

Currently, Zuckerberg is scheduled to appear twice, on two consecutive days. On Tuesday 10 April 2018 at 2:15pm ET (7.15pm BST), Zuckerberg will appear before a joint hearing of the US Senate Judiciary and Commerce committee, and on Wednesday 11 April at 10am ET (3am BST) he will see the US House Energy and Commerce Committee.

How can I watch Zuckerberg's testimony?

Tuesday's hearing is dead easy: you can just stream it on the Committee on the Judiciary website.

Wednesday's one is tougher, as the House Energy and Commerce Committee website doesn't have a video player. It's worth keeping an eye on the committee's YouTube page, as it may well have a livestream on the day.

We'll update this page when we have something more concrete.