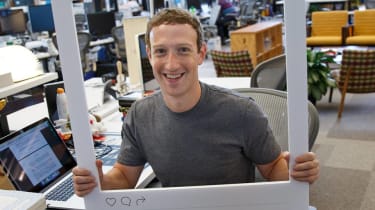 European lawmakers were unsatisfied with Mark Zuckerberg's answers to their questions in an open session last night, despite Facebook's CEO apologising again for the role his company played in allowing fake news to spread during elections.

In a 90-minute session in Brussels, MEPs posed a series of questions to the Facebook founder, with Zuckerberg outlining how Facebook intends to respond to recent scandals that have embroiled his company, from the spread of fake news to alleged misuse of people's data by Cambridge Analytica in order to influence the outcome of the 2016 US election.

The Facebook founder also told the European Parliament how Facebook intends to harness AI to proactively flag inappropriate and harmful content, versus more reactive methods it relied on in the past, like users manually flagging such content as and when they spotted it.

But the format - in which the 12 MEPs asked their questions in succession over a full hour before allowing only 22 minutes for answers - was itself criticised for allowing Zuckerberg to condense his prepared answers into broad responses that avoided answering the most difficult points.

Guy Verhofstadt, the leader of the European Parliament's liberal group, blasted the format as "pre-cooked" and "inappropriate", adding it had allowed Zuckerberg to avoid questions.

"It's unacceptable that Zuckerberg came to the European Parliament and did not answer any of our questions. We will not let the matter rest," he tweeted.

Following the session, European Parliament president Antonio Tajini said: "Mark Zuckerberg apologised to European citizens. I expect Facebook and all other digital platforms to fully comply with the new, stringent data protection rules entering into force on 25 May.

"[We] made clear to Mark Zuckerberg that digital platforms have to guarantee full protection of our citizens' privacy. We cannot accept illicit use of personal data to manipulate elections. Democracy cannot be turned into a marketing operation."

Zuckerberg said Facebook would be ready for GDPR, saying it has asked EU users to review new GDPR-compliant data-sharing settings, and that "a large percentage of the users had already reviewed them".

But the format meant Zuckerberg did not respond to a question about why Facebook had moved 1.5 billion users outside of the scope of the new laws, by changing their data controller from Facebook's international headquarters in Dublin.

Damian Collins MP, chair of the the Digital Culture Media and Sport (DCMS) select committee, which is leading Parliament's inquiry into fake news, labelled the session a "missed opportunity" and said the format "led to no real scrutiny".

"Zuckerberg is right to say that Facebook did not take a broad enough view of its responsibilities. Their failure to clearly answer the questions put to them by the Digital Culture Media and Sport (DCMS) select committee leaves me with little confidence that this has changed," Collins added.

He continued: "If Facebook is as committed to the provisions of GDPR as Mark Zuckerberg has suggested, then why is Facebook moving all non-European users outside of the EU's jurisdiction?"

Leading up to the session in Brussels, Zuckerberg was expected to be subject to a much greater degree of scrutiny than he was when questioned by US Congress in a similar session last month, with many viewing this session - in which he faced a ten-hour grilling - as a missed opportunity to pin down the Facebook chief.

Zuckerberg has to date refused to be questioned by MPs in the UK, sending Facebook CTO Mike Schroepfer in his place last month when first invited to give evidence before the committee.

Despite Collins' dissatisfaction with Schroepfer's answers, and with Facebook's response to the 39 additional follow-up points the committee put to the company following the session, Zuckerberg has "no plans to meet with the committee or travel to the UK at present", according to its head of public policy in the UK, Rebecca Stimson, writing in a letter address to Collions earlier this month.

Mark Zuckerberg's grilling by MEPs will now be livestreamed for the world to watch.

The Facebook CEO had previously agreed only to a private meeting with representatives at the European Parliament, who want to question him about privacy and data-sharing on the platform.

But following talks with Zuckerberg, the parliament's president, Antonio Tajani, tweeted this afternoon to say the meeting would now be publicly available via a livestream when it takes place between 6.15pm and 7.30pm CET tomorrow.

The initially private nature of the meeting drew criticism from campaign groups, the public and MEPs, with Sven Giegold, MEP for the German Green Party, creating a petition to make the session public that has collected 30,000 signatures.

The social network is embroiled in the Cambridge Analytica scandal, which saw millions of users' information collected and analysed to allegedly influence voters in the US presidential election.

Cambridge Analytica has denied playing a role in the EU referendum, but the UK data watchdog is currently probing the use of data analytics in the run-up to the Brexit vote.

It's expected that the parliament will question him on these matters, as well as on the subject of the GDPR, which will come into force on Friday, handing people more rights over how organisations use their data.

Facebook has said it plans to implement GDPR-like protections for its users across the world, but recently made sure the legislation wouldn't apply to 1.52 billion users who live outside the EU, but whose terms and conditions were agreed with Facebook's international headquarters in Ireland.

While Zuckerberg has appeared in front of both the US Senate and Congress, he has rejected invitations to appear in front of Parliament's Digital, Culture, Media and Sport Select Committee.

When told he faces a formal summons next time he visits the UK, a spokesperson said the billionaire "has no plans to meet with the committee or travel to the UK at present" (read our story below).

Viewers can livestream the session via the European Parliament's website.

Mark Zuckerberg has accepted an invitation to appear before the European Parliament in a closed-door session over the Cambridge Analytica scandal surrounding his firm, despite yet again refusing to be questioned by MPs in the UK.

European Parliament president Antonio Tajani confirmed the Facebook founder and CEO will be in Brussels "as soon as possible, hopefully already next week" to meet the leaders of political groups and the chair and the Rapporteur of the Committee for Civil Liberties, Justice and Home Affairs (LIBE).

"Our citizens deserve a full and detailed explanation. I welcome Mark Zuckerberg's decision to appear in person before the representatives of 500 million Europeans," he said. "It's a step in the right direction towards restoring confidence."

The conference of presidents, a governing body comprising the elected heads of the European Parliament's political groupings, has also decided to organise a hearing with Facebook, providing members of the LIBE committee to carry out an in-depth analysis of aspects related to personal data protection, with emphasis placed on its role in elections.

Meanwhile, Facebook's head of public policy in the UK, Rebecca Stimson, wrote to Damian Collins MP, chair of the Digital, Culture, Media and Sport (DCMS) select committee, this week to confirm Zuckerberg "has no plans to meet with the committee or travel to the UK at present".

The DCMS committee is investigating whether third party use of Facebook users' profile data contributed to the vote to leave the EU, as well as the use of fake accounts to spread fake news on the platform.

The 40-page letter, in response to the committee's formal request for Facebook to respond to 39 points it felt Facebook CTO Mike Schroepfer answer answered unsatisfactorily last month when he appeared before MPs, arrived three days after an initial 11 May deadline - with Facebook requesting, and being granted, an extension.

The committee tweeted that it remained open to Zuckerberg giving evidence via video link, or in person, adding: "Him not appearing before us is not just a snub to the DCMS committee, but more importantly a snub to the UK and the millions of Facebook users in the UK who deserve answers."

Collins said in a statement that Facebook's responses "do not fully answer each point with sufficient detail or data evidence," and that the committee plans, again, to follow up with the company.

"If Mark Zuckerberg truly recognises the 'seriousness' of these issues, as they say they do, we would expect that he would want to appear in front of the Committee and answer questions that are of concern not only to Parliament, but Facebook's tens of millions of users in this country," he said.

"Although Facebook says Mr Zuckerberg has no plans to travel to the UK, we would also be open to taking his evidence by video link, if that would be the only way to do this during the period of our inquiry."

After Schroepfer faced a set of tough questions before on MPs' in place of Zuckerberg last month, Collins threatened to compel the Facebook CEO to appear before the committee, writing to Stimson: "It is worth noting that, while Mr Zuckerberg does not normally come under the jurisdiction of the UK Parliament, he will do so the next time he enters the country."

"We hope that he will respond positively to our request, but if not the Committee will resolve to issue a formal summons for him to appear when he is next in the UK."

Collins added: "Following reports that he will be giving evidence to the European Parliament in May, we would like Mr Zuckerberg to come to London during his European trip. We would like the session here to take place by 24 May."

A DCMS committee spokesperson confirmed no formal summons has been issued to Zuckerberg to date, although Vote Leave campaign director Dominic Cummings, and former Cambridge Analytica CEO Alexander Nix - both embroiled in the burgeoning scandal over the alleged misuse of data in political campaigns - were subject to formal summons.