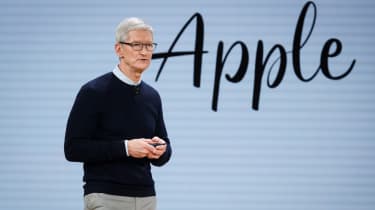 Tim Cook wants the US to implement data privacy laws similar to the EU's General Data Protection Regulations (GDPR), commenting that collecting huge swathes of data could be harmful to the country's citizens.

Cook told attendees at a privacy conference in Brussels that he is totally committed to privacy unlike some of Apple's competitors and, as such, it's supporting nationwide privacy reform. He also touched upon some of the concerns around security, including data collection, surveillance and manipulation, saying that as technology becomes more advanced it's also becoming more invasive.

"Platforms and algorithms that promised to improve our lives can actually magnify our worst human tendencies," said Cook. "Rogue actors and even governments have taken advantage of user trust to deepen divisions, incite violence, and even undermine our shared sense of what is true and what is false. This crisis is real. It is not imagined, or exaggerated, or crazy."

He said personal information is becoming "weaponised", with businesses misusing information on preferences, behaviour and more. He said it's being used against citizens with "military efficiency" and the trade of information has become "a data-industrial complex".

Although Cook didn't mention the likes of Facebook and Alphabet by name, he hinted that his company would not misuse information, avoiding situations like the Cambridge Analytica scandal, because it would simply never allow its data to fall into the wrong hands, neither would it use its data for anything other than services that benefit its customers.

"These scraps of data, each one harmless enough on its own, are carefully assembled, synthesized, traded, and sold," he continued. "This is surveillance. And these stockpiles of personal data serve only to enrich the companies that collect them. This should make us very uncomfortable."

Data protection in the US, which is governed at the state level, is considered to be far more lenient when it comes to the processing of data compared to the EU-wide GDPR. California has already moved to introduce GDPR-like data protection rules, due to come into force in 2020, bringing tougher restrictions on what constitutes consent, and limits to how data can be shared. US tech firms have largely opposed this law as they feel it makes data processing too difficult, and the definition of what constitutes personal data goes too far.

US tech firms have previously said they would back a nationwide data protection law, provided it came into force before California's Consumer Privacy Act (CCPA) and that any proposed regulations would include consultation with the tech industry essentially an attempt to subvert the CCPA before it can set a precedent.

However, the Senate Committee has suggested that any federal law would need to be far more progressive than the one proposed by California, and senators have already expressed concerns that the tech industry is likely to reject an early draft.