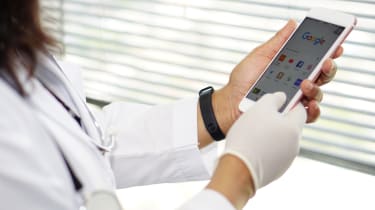 In the flood of other news, you may have missed the announcement that DeepMind's Streams app is being taken over by Google itself. DeepMind is part of the Alphabet group of companies, which includes Google, and Streams was developed to help health professionals get clinical alerts about kidney disease. To test this, the Royal Free NHS Foundation Trust gave DeepMind a bunch of patient data.

This proved a tad contentious. In July 2017, the Information Commissioner's Office ruled that the Royal Free NHS Foundation Trust had provided the personal data of around 1.6 million patients without complying with the relevant data protection law. In essence, the patients weren't adequately informed that their health records had been handed over to DeepMind. The data transfer hadn't been fair, transparent, lawful, necessary or proportionate. Now you might assume that someone went to jail for this? Oh, please stop before the laughing starts to hurt. Perhaps there was a landmark fine then? Oh, please stop before the... you get the idea.

That would have been too much for the NHS and DeepMind. No, instead the Royal Free NHS Trust was asked - I repeat, "asked" - to "commit to changes ensuring it is acting in line with the law by signing an agreement".

And there's more. Please could it "establish a proper legal basis under the Data Protection Act for the Google DeepMind project and for any future trials; set out how it will comply with its duty of confidence to patients in any future trial involving personal data; complete a privacy impact assessment, including specific steps to ensure transparency; and commission an audit of the trial, the results of which will be shared with the Information Commissioner, and which the Commissioner will have the right to publish as she sees appropriate."

Well strap me to an oil rig and whip me with seaweed. 1.6 million health records handed over to DeepMind, and that's all that happened.

Roll forward to today. Streams is now being handed over to the wider Google platform. "Our vision is for Streams to now become an AI-powered assistant for nurses and doctors everywhere - combining the best algorithms with intuitive design, all backed up by rigorous evidence. The team working within Google, alongside brilliant colleagues from across the organisation, will help make this vision a reality."

There's more: "We'll be working closely with them as we plan for the team's transition, and information governance and safety remain our top priorities. Patient data remains under our partners' strict control, and all decisions about its use will continue to lie with them." Which sounds just fine, except that the NHS, in the form of the Royal Free, has shown itself to be wholly unreliable in just such a role. It wasn't able to control and maintain governance of the data in the past. Why should we believe that it can do so now?

Underlying this is the wider dilemma. Big Data has a huge role to play in the future of healthcare. That isn't in question. What is in question is the willingness and ability of the NHS to manage a relationship with a global IT company, based in the USA, even if the Streams team remains in London. So far, the track record has looked nothing less than shockingly bad. Why will it get better?

And here is the issue. The NHS thinks that all the patient data belongs to it, and ultimately the Secretary of State for Health. My health record isn't mine. Yours isn't yours. It's theirs. And we're starting to see the first movements by the big three companies (Microsoft, Google, Amazon) in making inroads into that space. They have the data centres, they have the AI processing power, they can deliver huge benefits to the NHS.

We have seen in the past how these companies have been prepared to buy their way into industry sectors. In October 2013, Microsoft announced Student Advantage: "Any academic institution that licenses Office for staff and faculty can provide Office 365 ProPlus for students at no additional cost," it promised. "Combined with Office 365 for Education plan A2, which is free for schools, Student Advantage gives students access to the same set of world-class productivity tools and services used by Fortune 500 companies all over the world."

Just wait until Google, Amazon or Microsoft lines up just such a deal for patient health records for the NHS. The Secretary of State for Health will sign the cheque, because it will be cheapest solution around, and money is tight. The NHS will hand over the data, because it believes it owns it anyway. And the large American corporations involved will data mine it to the moon. Why wouldn't they? Who will stop them? Clearly not the Information Commissioner.