What to expect from Commvault GO 2019 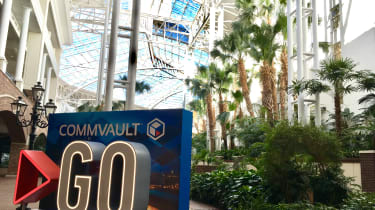 Regime change is never straightforward. After 21 years at the helm, leadership double act Bob Hammer and Al Bunte have been ushered aside for the fresh face of former Puppet CEO Sanjay Mirchandani.

This is the single biggest narrative that's expected to dominate Commvault GO 2019, hosted in Denver, Colorado. Of course, the company itself will be keen to shift the focus onto its latest products and projects, but how the new chief seizes the reigns following a turbulent year could come to define Commvault's fortunes moving into 2020.

A bumbling performance delivered by Bob and Al on the main stage at last year's GO, dubbed by insiders as 'the Bob and Al show', became a metaphor for the firm's languishing identity in the market. By the time Commvault GO 2019 appeared on the horizon, the firm was well underway in its hunt for a replacement CEO but was struggling to make progress

Commvault, in a way, resembled something of a rally car spinning its wheels endlessly in the mud. Despite really promising changes, like simplifying its product lineup and revamping the central user interface (UI), the lack of movement at the top meant the company had found it tough to finally transcend its legacy and break into the next phase of its existence.

This isn't to say it's been all sunny uplands since Mirchandani took the helm. The past 12 months have been highly volatile. This culminated in Commvault's fourth-quarter financial results, released in April, revealing a 2% year-on-year decline in revenue. These disappointing figures caused the firm's stock price to drop sharply, virtually erasing an equally sharp rise that came a couple of months prior when the new CEO was appointed.

In Denver, there are high expectations placed on the shoulders of Commvault and its executive leadership; not only to bring fresh ideas to backup and data management but to turn around the company's slipping fortunes. Over the next week, we should expect to see Commvault outline a refined strategy to tackle these issues, which may well include new products and services. There could also be a number of surprises in store, with the company keen to forge itself a new identity.

Elsewhere, we'll be hoping to catch up with Commvault's global and EMEA channel leads on how it's hoping to exploit its foothold among its partners. The conference comes just a short while after the company completely reshaped its channel strategy, however, in spite of these changes, "poor execution" in the channel was one of the key factors behind its disappointing 2018/19 financial performance.

We'll be asking whether ushering in a new era of leadership also means a further channel restructuring, and how the company feels its recent changes have played out. Changes to the company's channel approach with regards to large enterprises, announced a few weeks back, certainly suggest this is an area the company will look to address.

I'll be on the ground reporting from the event, so be sure to come back to discover the latest from the show.