SAP seeks $600m from Stella Artois brewer - what does this mean for other customers? 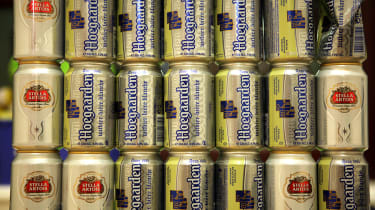 SAP is seeking more than $600 million in compensation from Hoegaarden brewer Anheuser-Busch InBev, weeks after successfully suing a British firm.

The tech giant accused the Belgian company, which also makes Budweiser and Stella Artois, of accessing its systems directly and indirectly without appropriate user licenses, and has commenced arbitration.

Anheuser said it will "vigorously" defend itself against the claims, which started in February and were revealed in the brewer's March US Securities and Exchange Commission filing.

"The statement of claim asserts multiple breaches of a 30 September 2010 Software License Agreement (together with related amendments and ancillary documents, the "SLA") based on allegations that company employees used SAP systems and data - directly and indirectly - without appropriate licenses, and that the company underpaid fees due under the SLA," the filing read.

SAP has not yet commented on the claims, but it comes shortly after the ERP giant won an indirect licensing High Court battle against British firm Diageo, against which it is seeking $54 million in compensation.

Diageo had contended that SAP PI was a "gatekeeper" licence providing access to SAP's ERP applications suite and its database, but the judge rejected the UK company's argument.

SAP had provided its services to Diageo from 2004 with pricing per named user. However, when in 2012 the firm implemented two third-party systems that hooked into SAP PI, a software engine, it broke this licence, the High Court found.

Diageo Connect, a system allowing customers to order online through a Salesforce system connecting to SAP PI, and Diageo Gen2, enabling staff to pull up customer data from an Oracle database associated with SAP's ERP software via a Salesforce app, both required additional licences that Diageo did not obtain.

"The recent SAP indirect access spat with Diageo with 60 million quoted in the legal proceedings looks like small beer, excuse the pun, compared to the Anheuser-Busch case," Martin Thompson, head of Campaign for Clear Licensing, told IT Pro.

"This is further evidence that SAP are clearly desperate for revenue at any cost, even it means suing their very largest customers."

What does this mean for SAP customers?

Customer concern around SAP's licensing tactics is growing, according to the latest SAP special interest group meeting minutes from the ITAM Review. And the advent of new technologies like the IoT means indirect access is likely to become more and more likely as more devices and services link up to a business's core IT systems.

On the one hand, SAP has sought to reassure customers, with its head of commercialisation strategy last year telling IT Pro that it aims for "a good policy" where customers "know what's coming at them", but on the other hand it is pursuing heavy compensation claims from major customers.

"[SAP's approach] certainly is alienating customers," Duncan Jones, principal analyst at Forrester Research, told IT Pro. "I can't speak about this particular case [Anheuser], but I have seen other claims from SAP that have been out of all proportion to what could be considered fair.

"I'd urge courts to consider 'what would the two parties have agreed had SAP made clear at the time, and the customer had understood and accepted that "use" means what SAP now claims it means?'"

While the Anheuser case is yet to reach court, the High Court judge did not rule entirely in SAP's favour, disagreeing with the company's demand that 'named user' status be extended to Diageo's customers who accessed the system.

Jones said it was unlikely that Diageo's SAP account director would have forced it to pay the full price for this indirect use.

"The SAP salesperson would obviously have included the relevant access within the deal, at minimal extra cost," he claimed. "He'd have sold them the 'sales & service order processing' module, or sold them a special user category, or given them a 98% discount on the additional user licenses - but no way would have increased his price by 100X, nor would he have told the client to implement SAP without integrating it with other systems."