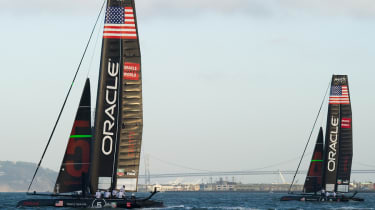 Never one to miss an opportunity to criticise a competitor, Oracle CTO Larry Ellison yesterday ripped into rival Amazon Web Services (AWS) as he debuted what he claimed to be a fully autonomous cloud database.

Oracle Database 18c "is the most important thing we've done in a long, long time", Ellison said on stage at Oracle OpenWorld in San Francisco.

The database uses machine learning to run itself without any human intervention, the founder said, leading to a 99.995% uptime guarantee for clouds using the database, as well as useful features like the ability to automatically patch flaws, tune and upgrade itself while running.

"Because it runs itself and tunes itself, it's very efficient with the use of computer resources; it's elastic," said Ellison. "If you need more compute capacity to run a query, it goes from eight to 16 processors and then drops back to eight [when you're done]."

Ellison drew a contrast between this autonomous approach and Amazon's Elastic Compute Cloud (EC2), and Amazon Redshift, Amazon's own data warehousing service, which he said can't automatically spin servers up and down as required.

"It's called Amazon Elastic... it's just not elastic. Redshift ... just can't do it. It's not an elastic system - you have to shut the system down, allocate twice the hardware here, copy the database over here... it is not elastic," he said.

Whereas Oracle's system is, he claimed, by using machine learning to understand when to deploy more resource and when it's no longer needed, so customers only pay for what they use.

The crowd were treated to some slides of how fast Oracle workloads run on Amazon Redshift, compared to how quickly they run on Oracle's 18c-powered autonomous data warehousing cloud.

A retail workload cost $0.02 to run on Oracle, compared to $0.31 on AWS, completing it within 20 seconds and 282 seconds respectively.

"You take a Redshift Amazon database workload that's already running on Amazon and you move it to the Oracle Autonomous Database and we will guarantee in writing, contractually, before looking at the workload, that any of those Redshift workloads will move to Oracle and your bill will be one half or less than what Amazon charges you," stressed Ellison. "We will write that in your contract."

Ellison also saved some energy to criticise AWS's 99.995% uptime guarantee, which he said was marred by a whole host of exclusions, such as scheduled maintenance and individual instance failures "not related to Region Unavailability" (you can read them all here).

In contrast, Oracle guaranteed just 30 minutes' downtime per year - a 99.995% uptime guarantee - for its data warehousing cloud, but with no smallprint exclusions - something enabled by the autonomous database's ability to patch itself and tune itself while running.

"Amazon has all of these exceptions of their availability guarantee. We have no exceptions - if it's down for any reason it's in that 30-minute budget we have for downtime," Ellison said.

Rather than putting database admins out of a job, Oracle's founder claimed his autonomous database was simply making their lives easier.

"They have more work than they can possibly ever get to - by automating a lot of this, this will free up database professionals to get away from routine patching, checking backups, day to day administration," Ellison claimed.

Instead, they can focus on more complex tasks like analytics, schema design, setting policies for what data's treated as mission critical, access policies and more that requires human judgement and admin expertise, he said.