MongoDB Europe kicks off in London with version 3.6

Department of Work and Pensions CTO explains why he chose MongoDB 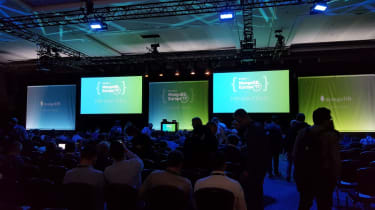 MongoDB Europe is taking place today in London, where the company is showcasing its new 3.6 build, which comes with a number of new features.

Eliot Horowitz, CTO and co-founder, took the stage to introduce the audience to MongoDB 3.6. "There is more stuff to talk about today than we have ever had before," he said.

He introduced the audience to a number of new features included in version 3.6, such as the ability for developers to change streams, which show updates in real time, and automatically retryable writes.

The audience was also introduced to MongoDB Charts, which creates charts out of database data and then puts them into dashboards. Horowitz said this feature is coming soon and the company will be rolling out a beta programme.

The CTO of the Department of Work and Pensions, Rob Thompson, also spoke in the keynote, explaining why the department chose MongoDB when it decided to create a digital service from scratch.

The department disperses 168 billion a year to 22 million UK citizens, including 14 million pensioners, and has a technology estate of about 1,000 applications.

Thompson said the department decided to build its own digital services, instead of outsourcing the work. "The teams were picking mature open source technology that had well known, well understood scalability, performance and reliability," he said, pointing to how Java, Javascript and MongoDB were chosen.

The department received a lot of help and support from the company, leading Thompson to describe it as a "developer-centric business", adding: "In a world where a democratisation of technology has put developers and developer teams centre stage in the digital revolution I have one piece of advice to give to the people of Mongo: if you continue to look after developers they will continue to look after you."