Office meetings hit by chaos due to Google Calendar outage

G Suite service down for more than three hours globally as office workers enjoyed the freedom... 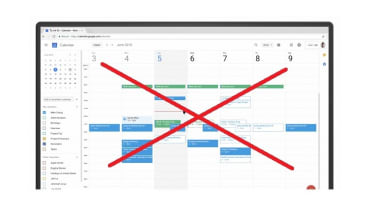 Google G Suite suffered an outage to its Calendar and Hangouts Meets services on Tuesday, locking desktop users out of meetings.

The Calendar tool, which is used by busy offices around the world, was down for more than three hours, disrupting UK users in the afternoon.

Google said the problem with its Calendar and Hangouts Meet should be resolved, but it didn't offer up any more information about what exactly the problem was.

"We apologise for the inconvenience and thank you for your patience and continued support. Please rest assured that system reliability is a top priority at Google, and we are making continuous improvements to make our systems better." a Google spokesperson told IT Pro.

According to Down Detector, the issue impacted users in parts of North America, South America, Europe, Africa and Asia but it only affected the web versions of the service. The Google Calendar app for iOS and Android, as well as some third-party mobile apps, appeared to be working properly.

This latest outage came two days after a report from Wired that exposed how hackers are exploiting a calendar setting to place event invites in another person's calendar and essentially scam unsuspecting users into entering personal and financial information.

It also follows a similar outage in March that affected Google Drive, Google Maps and also Hangouts, all of which were down for seven hours. On that occasion people in Europe, the US, Australia and Asia were affected by the outage.

While many struggled with the disruption, some saw the bright side and took to Twitter to make jokes about the outage.

"GCal is down - no idea what I should be doing or where I should be. Can't decide if I should embrace my new freedom or wander the office halls asking coworkers if we're supposed to be meeting now," wrote Thomas McCorkle, who works for SaaS management platform Zylo.

GCal is down - no idea what I should be doing or where I should be. Can't decide if I should embrace my new freedom or wander the office halls asking coworkers if we're supposed to be meeting now.

Even the platform itself had some fun at Google's expense, tweeting: "Is today cancelled, @googlecalendar?"