A sexy all-in-one desktop, which packs a crisp 23in display and NFC connectivity.

HP has revamped the desktop space with the self-serviceable Z1 Workstation, but not every office needs all-in-ones with high-end workstation hardware or screens that lift up to allow component access. Its latest desktop, the SpectreONE, could fit the bill - and is a far classier affair.

The all-in-one packs Intel's Core i5 chipset, discrete graphics and even includes NFC connectivity, but is it a worthy alternative to the popular iMac range?

HP's machine relies on an Intel Core i5-3470T, which is a low-power Ivy Bridge part that runs at 2.9GHz. It scored a respectable 0.73 in our application benchmarks, which is enough to keep Windows 8 feeling responsive, but it's not enough power to handle high-end office applications. It's also not enough grunt to compete with Apple's latest iMac, which included a low-power Core i7 chip and scored 0.96 in the same benchmarks.

The HP fell behind in our graphical tests, too. The HP does include discrete graphics, but Nvidia's GeForce 610 is the weakest core in its current range, and it limped to 54fps in our Low-quality Crysis benchmark. The iMac, powered by a GeForce GT 650, romped through the same test at 141fps, and Apple's machine went on to score 33fps in the more demanding High-quality benchmark.

HP hasn't included an optical drive inside the SpectreONE - there's simply not the room - but the rest of the specification is fine, with a 1TB hard disk, 4GB of RAM and dual-band 802.11n wireless.

The most interesting inclusion is NFC. We've not yet seen this technology inside a desktop PC, and it's used here to stream content and share files between the PC and a smartphone or tablet.

The SpectreONE includes a couple of NFC tagging stickers to use with devices which don't have the technology built-in and, at first, it works well: tap a device against the NFC chip built into the SpectreONE's base, and a direct Wi-Fi link is quickly established between the two. We soon ran into problems, however - the features only work when used with an app that's only available for devices running Android 4 or later and, while audio streaming worked flawlessly, movie files just wouldn't stream at all.

HP hasn't included a touchscreen in the SpectreONE's specification, but the touch features associated with Windows 8 haven't been ignored - even if the HP's large metallic touchpad bears more than a passing resemblance to Apple's own "Magic Trackpad" peripheral.

The touchpad allows users to scroll smoothly around the Start screen by stroking two fingers across surface. Swiping from the right-hand side opens the Charms menu, stroking from the left switches between open applications, and pulling a finger down from the top of the pad opens the options menu at the bottom of the screen.

The two buttons built into the corners of the touchpad are responsive, but the SpectreONE's more traditional peripherals aren't quite as impressive. The mouse has a small touchpad rather than a conventional wheel, and its haptic feedback vibrations and scrolling motions are inconsistent. The keyboard has a fine layout and typing action, but it's not got any buttons specific to Windows 8's new shortcuts - an oversight that's disappointing on a system that's so detailed elsewhere.

The screen is vital when it comes to all-in-one machines, so we're pleased to report that after some tinkering the SpectreONE's panel fits the bill.

We've no complaints about the 1,920 x 1,080 resolution but, it had a blue tint and looked far too dim out-of-the-box. Loading up HP's own My Display software sorted the screen out: we upped the contrast from 50 per cent to 75 per cent, and switched the screen's mode from "cool" to "warm", and the situation immediately improved.

With its settings changed, the screen's brightness hit a respectable 248cd/m2, colour accuracy improved drastically, and a revised contrast ratio of 1,180:1 made for punchy, intense images. The HP's panel still can't quite match the stunning iMac 21.5in's screen for quality - we're no fans of the SpectreONE's slight bottom edge backlight bleed, nor its poor vertical viewing angles - but it's still better than most Windows-based all-in-ones. 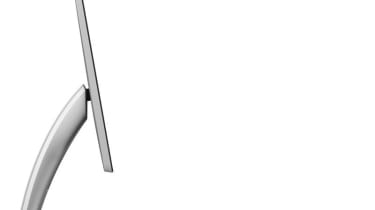 HP has always made well-designed products and the SpectreONE is no exception. The glossy black bezel features a simple HP logo and silver stand make this one of the smartest all-in-ones around, even if it looks as if it's rolled out of Apple's own iMac factory.

Get a little closer, though, and smaller touches set the SpectreONE apart from Cupertino's latest desktops. Rather than starting with a tiny edge and bulging in the middle, the HP's screen measures 14mm across its entire width - and the rest of the machine isn't much bulkier: the shiny metallic base narrows to a front edge that's just 4mm from top to bottom.

It's difficult to see where HP has actually crammed in its components, but they're found at the back of the gently curving stand. The plastic rear can be removed with a couple of screws, and the small motherboard sits underneath. It's a clever bit of engineering, and HP has even managed to fit in some upgrade room - single SO-DIMM and mSATA sockets are free, and the hard disk caddy is easily accessible.

The SpectreONE isn't a PC with any glaring issues; rather, it's a system that has its high-quality feel hampered by several smaller problems. While it looks fantastic, has a good screen and even packs has upgrade potential, the specification is mediocre and the NFC features don't work as well as they could.

The price, too, is an issue. This machine costs 1,200 and, for less, you could buy the cheapest 21.5in iMac, which has a better display, beefier processor and a far quicker graphics card. The SpectreONE is an impressive shot across Apple's bow, but it's not quite a direct hit.

The SpectreONE gets off to a good start with its stunning looks and good build quality, and it continues to impress with a high-quality screen - once HP's software has been reined in. Its specification can't compete with even the cheapest 21.5in iMac, though, and the Apple machine also offers better screen quality for less money.