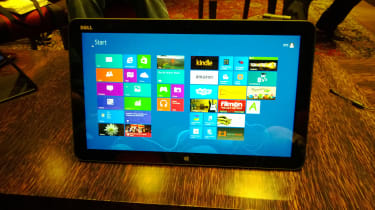 Dell's XPS 18 is the latest all-in-one PC that aims to live a double life as an oversized tablet.

The device is similar to the Sony Tap 20, running Windows 8 and offering portability through a battery. However, it's nowhere near as wacky as the Asus Transformer AiO which doubles as both a Windows PC and an Android tablet.

Although Dell might be playing it safe in terms of the software, the firm hopes to attract users by claiming to have the lightest and thinnest device on the market. But when we say light we're not exactly talking featherweight.

The 18.4in full-HD display is the headline feature in the device, but it brings with it considerable bulk. Whether you're holding it in your hands or resting it on your lap, as Dell claims is possible, you're going to feel the weight. At 2.1kg the device is not something users are going to be holding for long periods of time, either.

We do like the flip-feet, which lets the XPS 18 stand unaided on a flat surface - and allow the screen to be positioned either vertically or horizontally. However, at present the positioning of the feet mean that when the device is placed horizontally the Windows home button is upside down. There is likely to be a design change in the final product. 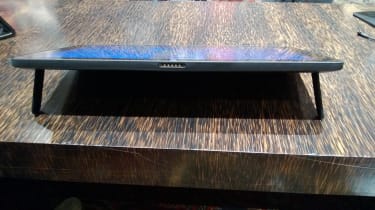 The same can't quite be said for the dock - which aside from providing height and different viewing angles - lacks any additional ports. Still Dell felt that it was more important to locate all necessary ports within the chassis, and we can see the logic. 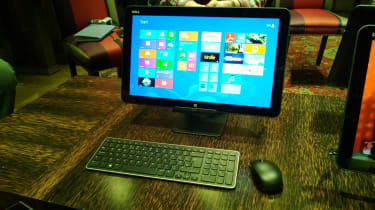 Dell is claiming five hours of battery life - which will be reasonable if the device can actually make it close to that figure. However, the battery will not be removable.

In terms of pricing, the XPS 18 starts at 849 (ex VAT) for the base configuration. However, the Sony Tap 20 offers a juicier specification for 832 (ex VAT). The Sony has a bigger display (20ins), more RAM (6GB) and ships with the more powerful Intel Core i5 chipset.

It remains to be seen how the Dell XPS will perform when benchmarked. We expect the higher-end Core i5/i7 devices to run smoothly, but concerns remain over how well the entry-level Core Duo range will function. With a release date of 16 April pencilled in, we shouldn't have to wait too long to find out.