With a minute form factor and an unbeliveably low price, is this PC too good to be true? 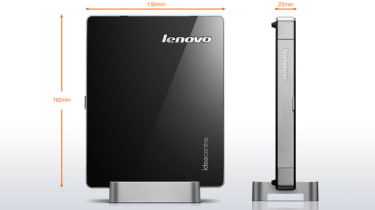 With the chassis and bargain-basement price comes an inevitable trade off - and that's the components that have been squeezed into the Q190. Our review featured the weakest specification available, and that means you're saddled with an Intel Celeron 887 processor.

It's a mobile part that launched at the end of 2012 using Sandy Bridge technology despite the venerable Celeron branding and its two cores run at 1.5GHz with no Turbo Boost. There's no sign of Intel's HD Graphics 2500 or 4000 GPUs, either - this chip uses the base-level HD Graphics chipset.

It's paired with 4GB of RAM, but the Celeron didn't exactly blitz our benchmarks. Its scored of 0.36 isn't much more than we'd expect out of a current-generation Intel Atom mobile chip, and it'll only be able to cope with Office applications intensive work software is out of the question. Multitasking isn't a strength of the dual-core chip, either. The score of 0.19 is weak.

The entry-level Intel graphics core makes Windows 8's Live tiles flash by smoothly, but it's not got the power to handle graphically intensive applications.

One benefit of the low-end processor is power consumption. It's miniscule: the Lenovo's idle power draw of 19W is impressive, and the peak power requirement of 29W is better still. We've rarely seen a system  so frugal.

We were surprised by the heat and noise this system managed to emit, mind: the processor might be a modest, low-power part, but its peak temperature of 77C is higher than we'd expect. And, when stress-tested, the single fan on the inside spun up to an irritating whine. Again, it's not something we expect to hear from a small, modest machine. 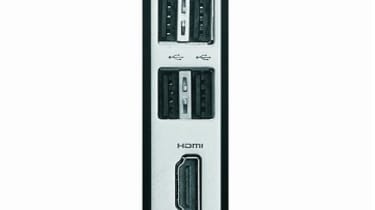 For storage, there's a 500GB hard disk included. It's a 5,400rpm mobile part rather than a 7,200rpm desktop disk, and it's not exactly going to challenge SSDs when it comes to speed: in AS SSD we measured its sequential read and write speeds at 72.9MB/sec and 75.8MB/sec. That's slow, even for hard disks.

Connectivity is handled by dual-band 802.11n Wi-Fi and Gigabit Ethernet but there's no sign of Bluetooth, vPro, TPM or any other enterprise-level features.

The software offering lacks some of the business focus we've come to expect from Lenovo's Think-branded systems, too. Lenovo Cloud Storage is powered by SugarSync and is a welcome addition. But Lenovo Assistant merely provides links to options already found elsewhere in Windows 8. Elsewhere, the trials of McAfee Internet Security and included version of PowerDVD are nothing to rave about.

The Q190 can be fitted with more capable components, allowing you to boost the performance. Spend an additional 100 and you'll get an Intel Core i3-2365M - a chip running at 1.4GHz across two cores. This has more cache and the HD Graphics 3000 core provides extra grunt to. That system also comes with a 1TB hard disk twice the storage that's on offer here.

The top-end model costs just 349. It's got the same processor, memory and hard disk, but it includes a Blu-ray reader a rare inclusion in a machine this cheap.

The IdeaCentre Q190 is a tiny system but it's too limited to work well for business use: the Celeron processor only has enough power to handle basic applications, there's no versatility on the inside, and corporate features we're used to aren't quite there. We can only recommend this for modest offices that won't miss the power or features offered by larger, more expensive machines.

A useful machine in a small form factor, but the Q190 is perhaps better suited to be a media entertainment hub rather than a full-blown work machine.