Haswell represents a major architectural change it's a "tock" rather than a "tick". However, the parts are created using the same 22nm manufacturing process as Ivy Bridge and the range remains dominated by quad-core parts.

Intel concentrates on two big areas power saving and graphics. The firm has been making big claims about the efficiency of its new chips, saying that Haswell parts draw 50 per cent less power than their Ivy Bridge equivalents when handling intensive workloads. 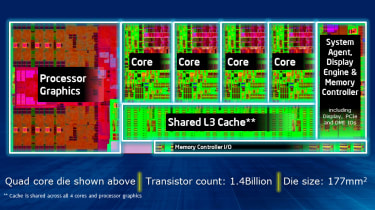 Haswell's graphics performance has been boosted by revamped integrated graphics chipsets. The most common is the HD Graphics 4600 core, which includes 20 improved executions. This makes it faster than the 16 executions included in last year's HD Graphics 4000 chip.

The chipmaker has also introduced of a new graphics brand: Iris. There are two new parts, dubbed Iris Pro 5100 and 5200, and they're more powerful than Intel's HD Graphics cores; the former chip has 40 execution units, and the latter adds 128MB of dedicated RAM an improvement on the shared memory found in all of Intel's other integrated chips.

Application performance has been given a bump too with Intel claiming Haswell is 10 per cent faster than Ivy Bridge. Elsewhere, DDR3 is still the memory of choice, and Thunderbolt is now natively supported.

Upgrading isn't as easy as buying a new processor - Haswell debuts alongside the new LGA 1150 socket, so you'll need a new motherboard, with the cheapest models available starting at 50 inc VAT. Intel's new 8-series chipsets add versatility: six USB 3 ports and six SATA 3.0 ports are now supported by Z87, and Intel vPro and Rapid Storage Technology have both been improved.

Intel is deploying dozens of Haswell chips across desktops and laptops. Desktop chips range from the 2.7GHz Core i5-4330S to the 3.5GHz Core i7-4770K, with the popular Core i5-3570K being directly replaced by the 4670K.

That's not the whole story, as suffixes denote different features. A "K" means a chip unlocked for overclocking, "S" indicates a low-power model, and "T" means an ultra-low-power part. A processor with a "P" means integrated graphics is left out, and a select few are "R"-branded parts, which means they're fitted with the more powerful Iris Pro 5200 graphics core.

Haswell also has a complicated range of mobile skews too. These chips cater to high-performance business machines, agile Ultrabooks and tablets. That means a bigger variation in clock speed and power consumption: the range is propped up by the 15W, 1.4GHz Core i5-4350U and topped off with the 57W, 3GHz Core i7-4930MX. Once again, suffixes are important: "MX" means a mobile extreme chip, "MQ" is mobile quad-core, "HQ" means a quad-core chip with an Iris Pro 5200 GPU, and "U" means ultra-low-power.

Haswell's third strand comes in servers. Intel is releasing a range of new dual- and quad-core Xeon E3 chips. The most powerful is the 3.6GHz, quad-core 1285v3, which includes a professional variant of the HD Graphics 4600 core. There's only one suffix to spot, with "L"-branded low power Xeons available.

Haswell is the standard-bearer for processing performance right now, but it doesn't come cheap. The Core i7-4770K costs a mighty 275, and the Core i5-4670K which will likely be the most popular Haswell chip will lighten your wallet to the tune of 191. Don't think that you'll be able to snap up a cheap Core i3, Pentium or Celeron that uses Haswell these don't exist.