AMD can't match Intel in terms of raw processing power. But its APUs are designed in a different way and the discrete Radeon graphics cores in Richland give these chips an advantage over Haswell's graphics cores. Plus AMD's parts are much cheaper than top-end Intel parts.

Richland is an evolution. The processor takes up 58 per cent of the chip's 32nm die, is built using "Enhanced" versions of last year's Piledriver core, but little has changed. Clock speeds are slightly faster, Turbo speeds more ambitious, the L2 cache is unified and 2,333MHz DDR3 memory is now supported by high-end APUs.

The other 42 per cent of Richland's die is taken up by Radeon HD 8000-series graphics. Don't be fooled into thinking that these are brand new GPUs. They don't make use of the Graphics Core Next architecture that debuted in 2012's HD 7000 and Pitcairn-based cards. Richland's graphical component is actually based on 2011's Radeon HD 6000, and it deliver small speed bumps over similar cores found in Trinity chips. 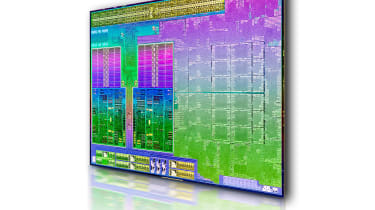 Richland still uses the FM2 socket, so older motherboards still work and the A55, A75 and A85X all remain compatible with the new APUs.

The Richland range also includes mobile chips, but these aren't based on the Enhanced Piledriver cores found in desktop parts. Instead, AMD is merely getting more bang for its buck from last year's Trinity architecture, with the same chips running at faster speeds, and with better power consumption.

AMD has released five Richland chips, with four quad-core and one dual-core parts used to form the new range. Top of the heap is the A10-6800K, which is a quad-core part that runs at 4.1GHz with a Turbo clock of 4.4GHz. It has Radeon HD 8670D graphics, which has 384 stream processors clocked at 844MHz. Next is the A10-6700, which is a little slower and doesn't come with an unlocked multiplier, so it's not suitable for overclocking.

The A8-6600K runs at 3.8GHz, boosts to 4.2GHz, includes the Radeon HD 8570D and is undercut by the slightly slower A8-6500. The A6-6400K is the only overclockable dual-core Richland chip but, thanks to its 3.9GHz stock speed, it's the only Richland APU that doesn't leave the factory running faster than 4GHz.

There are more mobile chips, with six quad-core models sitting above five dual-core. It's topped by the A10-5757M, which runs at 2.5GHz, hits a top Turbo speed of 3.5GHz, and includes HD 8650G graphics. It's got 384 stream processors like Richland's desktop parts, but its top speed of 720MHz is a little slower. At the bottom of the range is the dual-core A4-5145M, which runs at just 2GHz and Turbos to 2.6GHz.