Intel has led the way in processing for the last few years, so it's no surprise to find Haswell in front in our application benchmarks.

The high-powered Core i7-4770K scored 1.16 in our application benchmarks. That's quicker than the 1.06 scored by previous generation Core i7-3770K, and it's further ahead of the FX-3850 AMD's most powerful processor scored 0.95 in the same tests. 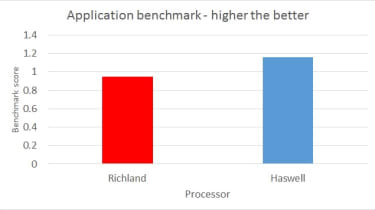 Graphics performance has taken a more dramatic leap forward. The i7-4770K's HD Graphics 4600 chipset rattled through our 1,600 x 900 Medium-quality Crysis benchmark at 38fps. That's easily playable, and an improvement on the 24fps scored by the Core i7-3770K but not quite able to match the 43fps of A10-6800K.

It's in gaming where Richland APUs make up ground. The A10-6800K's Radeon HD 8670d graphics core scored 90fps in our 1,366 x 768 Low-quality Crysis test, and 43fps when we upped the resolution to 1,600 x 900 and quality settings to Medium. In both tests that's five frames faster than Haswell's HD Graphics 4600 could manage, and even further ahead of Ivy Bridge.

AMD's latest chips perform well without consuming much power. Our test rig, comprising 8GB of RAM and an SSD alongside the A10-6800K, consumed a miniscule 37W when idle and 108W when stress-tested. Our high-end Haswell machine required just 38W when idling but this figure rocketed to 185W at peak load.