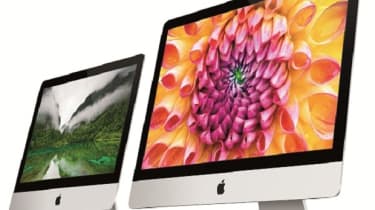 Phillip Schiller, senior vice president of worldwide marketing at Apple, said: "iMac continues to be the example that proves how beautiful, fast and fun a desktop computer can be."

The vendor's refreshed iMac portfolio features two 21.5in models, with the entry-level version being powered by a 2.7GHz quad-core Intel Core i5 processor, while the higher end device features a 3.4 GHz Core i5 variant.

The two 27in models Apple is bringing to market feature the same processor as the higher end 21in device, as well as NVIDIA GeForce 700 series graphics.

Apple claims the latter delivers twice the video memory and up to 40 per cent faster performance than the previous generation of iMacs.

The 21.5in devices have a starting price of 1,149, while pricing for their slightly bigger stable mates starts at 1,599.

Users also have the option to upgrade to a quad-core Intel Core i7 processor and NVIDIA GeForce GTX 780M series graphics with up to 4GB of video memory.

Each model comes with a standard 8GB of memory, with the option to expand this to 32GB, and a 1TB hybrid Flash drive. This can also be upgraded to store 3TB of data.