The latest iMac packs Haswell chips and GeForce graphics, but skimps on the RAM and storage. 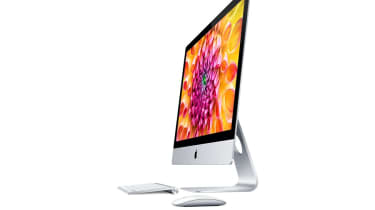 Apple's 27in iMac is the firm's flagship workstation for graphics and video applications, and has been a favourite within publishing and multimedia companies.

The late-2013 refresh iMac continues where predecessors left off. It's got the gorgeous all-in-one design but the starting price of 1599 is 100 up from last year. Is the inclusion of Intel's Haswell quad-core processor and discrete graphics from Nvidia enough to justify the increase?

The 27in model stands out because the screen panel provides a tantalising 2560 x 1440 resolution.

The bright, colouful images from the large IPS panel make it ideal for graphics applications, page layout work, video editing and photography. There's plenty of space available so you can multitask comfortably and won't find work being obstructed by toolbars and palettes. 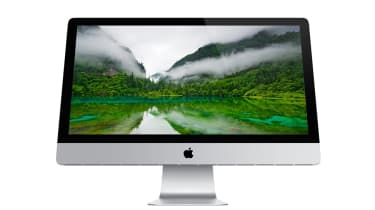 Apple's emphasis on performance continues with 2013 update, which includes the latest processing and graphics parts from Intel and Nvidia. We reviewed the entry level 27in model, which starts at 1599. For this you get a quad-core Haswell i5 chip running at nippy 3.2GHz.

There's a graphics update too, with the old GeForce GTX 660M part replaced with the 755M graphics card.

Both models ship with 8GB of memory and 1TB hard drive. This is the same as the 2012 models and we expected more, especially considering the 1600 price point.

Apple's Fusion drive, which combines the conventional hard drive with a 128GB solid-state module is only available as a build-to-order option adding 160. We would have liked to see the Fusion drive included as standard.

Apple has squeezed in four USB 3.0 ports, an SD card reader and Gigabit Ethernet onto the slim-line chassis.

With a maximum I/O speed of 10Gbps (theoretically twice the speed of USB 3.0) the Thunderbolt ports are designed to transfer large images and videos. But Thunderbolt can also be used to connect additional monitors, as well as cameras, audio and video recording devices. 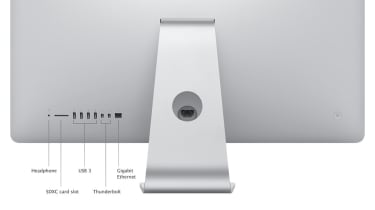 User upgradability is not a strength of Apple products. The only serviceable part is the RAM, which can be increased up to 32GB.

Apple axed optical drives long ago and if you need to copy files or install software then you'll to do this via USB. If you need to play or burn disks, you'll have to pay an inflated 65 for Apple's SuperDrive.

The iMac does provide workstation levels of performance. The modest increase in clock speed meant that the Haswell processor only proved 10 per cent faster than its predecessor (Ivy Bridge) in our tests, but the GeForce GT 755M did live up to Apple's claims of providing 40 per cent oomph when it came to 3D graphics.

The biggest weakness from a performance perspective was the hard drive, which lacked the zip solid-state drives provide.

There's no doubt that the 27in iMac is a beautiful machine suitable for a wide range of graphics, video and audio applications.

However, PC-vendors such as HP are beginning to build in Thunderbolt ports and use Nvidia's Quadro professional graphics range, so it's becoming increasingly hard to recommend the iMac for intense workloads.

The lack of upgradability of the iMac is also going to irk businesses, considering the price. Even the smaller entry-level 21.5in model starts out at a hefty 1149.00.

If you're on a tight budget, buying a conventional tower PC with a separate monitor will be cheaper than an all-in-one system. But if you're set on an AiO, it's worth looking at PC alternatives from Dell and HP as they are likely to provide better ROI.

The iMac’s design is in a class of its own, performance is strong and display near faultless. But PC vendors are catching up and are starting to offer better value alternatives.