Is this £700 camera and speakerphone combination value for money? 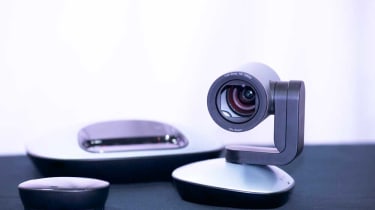 If you haven't got the budget for an expensive audio/visual unit from the likes of Polycom, Vidyo or Cisco, Logitech's cc3000e ConferenceCam could fill the void.

The ConferenceCam uses a PTZ (pan, tilt and zoom) camera head together with a separate speaker phone unit to provide conference calling capabilities. There's also a small handheld remote to control the camera, and basic functions of the calls.

Unlike other video conferencing tools, you can't use the ConferenceCam as a standalone device. It needs to be hooked up to a PC, Mac or even a Chromebook.

Logitech doesn't provide any software in-the-box but this isn't an issue. The ConferenceCam is certified to work with popular video calling services including Lync, Jabber, Skype and WebEx. There's nothing to stop you hooking it up to Google's free Hangouts service either.

We would have liked a configuration utility to control camera settings or to test connections, though.

You'll be up and running in minutes and if you've got a PC or Mac with an Intel Core processor, at least 2GB of RAM and stable internet connection.

The USB plug-and-play interface makes the ConferenceCam a doddle to setup. There's a cable for the audio unit and the video camera, then a power cable for the interface box and a USB lead to connect it to the host computer.

Connect the cc3000e to a computer and the PTZ unit will wiggle to show you it's alive. The speaker unit will also display an icon if it's not connected properly. 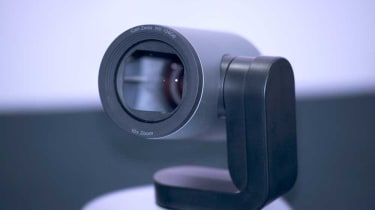 Cable lengths are generous. There are two 16-foot cables connecting the hub to the speakerphone and camera. The USB attachment is 10-feet long. Logitech supplies Velcro cable ties to neaten it all up too. We're left with the feeling it's been designed to packed up and moved around.

However, trailing a four cables across a meeting room give an untidy appearance and it's not great for reliability. It would be interesting to see whether Logitech could build a similar unit using wireless connectivity to minimise wires and use Cat5 cables, for greater installation flexibility.

The speaker unit is designed to go on table or desktop; the camera could go on a table or shelf, but also has a standard tripod bush on the underside, which gives more mounting options.

The video camera uses a single CMOS chip and a Carl Zeiss lens to deliver 1080p full HD quality at 30fps. This is similar to what you can expect from a consumer-grade camcorder. Our test unit arrived with a large mark on the lens, although this didn't affect video quality.

The speaker unit is standard conference phone design, with soft buttons to make and release calls; an LED ring around the controls lights up when the unit is operating. 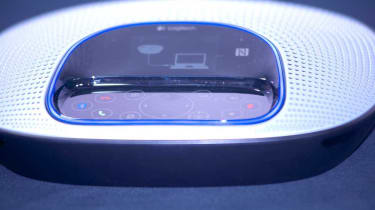 Audio coverage is good and echo cancellation works well. Although as with any speakerphone, room acoustics will come into play. Clarity of speech will depend on how carefully the unit is placed, and where speakers sit, in relation to the audio box.

The camera unit has a 260 degree pan, 130 degree tilt and 10x zoom capabilities so its possible to switch focus between participants in a group chat. This opens up the possibility of using the cc3000 for live streaming or webinars rather than just point-to-point calls. But whilst the ConferenceCam is suitable for a handful of users, going beyond this limit we see it struggling.

Another letdown is the inability to connect up peripherals. Even a 3.5mm mic jack would improve flexibility, giving the option of running a tabletop (boundary) mic, or a clip mic for a presenter, into the audio box. Other conference phones have extra mic hook ups, so it's an omission from the cc3000.

AV quality is good and Logitech scores points for ease of set up but falls down on a lack of flexibility. There are no manual controls for the camera, and the system is not expandable. You cannot add an additional mic, or record video locally either.

Priced at 700, personal users and SMBs will struggle to justify the cost on top of laptop with an embedded camera. IT departments looking to set up a video conferencing room are also likely to spend more on a dedicated camera and encoder, or a standalone unit that doesn't rely on a PC.

Despite the good quality AV output, the ConferenceCam ultimately falls into no-mans lands due to the price.