Opinion: The blue screen of death took on new meaning in Colorado, as one shopowner shot his Dell eight times 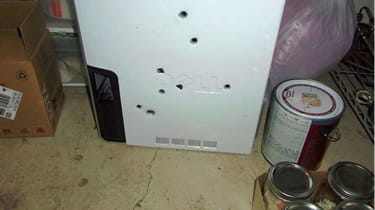 You've got to pity poor Lucas Hinch. The American shop owner struggled with his Dell desktop PC for months, and after finding no solution, took the ultimate action: he shot it.

As the Colorado police report reads: "Officers responded to shots fired... Investigation revealed a resident was fed up with fighting his computer for the last several months. He took the computer into the back alley and fired eight shots into the computer with a handgun, effectively disabling it."

As alarming as US gun culture is, anyone who's fought with a flawed PC will have some sympathy for the trigger-happy Hinch - who stressed he made sure there "wasn't anything behind it" and "nothing to ricochet".

The small business owner told reporters that he had "just had it" and was frustrated at constantly seeing the infamous blue screen of death.

"It was extremely frustrating," he told the LA Times. "I reached critical mass."

Afterwards, despite facing a fine from police for discharging a weapon in city limits, he said destroying his Dell felt "glorious" and as though "angels sung on high".

Who hasn't felt like that? Comments on the police Facebook page were mostly sympathetic, ranging from "I think most of us could understand his mindset" and "I'd say he was just defending himself" to noting the similarities with the film Office Space, in which characters satisfyingly smash up an anger-inducing printer (NSFW language).

It's easy for tech-savvy sorts to forget how frustrating computers and their various add-ons and peripherals can be to those who don't understand the systems quite so well.

But those of us who have some understanding of computers, and especially those in IT support or procurement, would do well to remember Hinch's extreme example.

It's worth making sure your staff have machines that work well, and it's worth giving attention to friends and family who need help with struggling PCs - even if it's simply to advise them to put down the gun and buy a new desktop.

Hinch's machine was a 2012 Dell XPS 410 - not so old that it should struggle so much. Those of us with tech skills might know how to restore a troubled PC to working status, but for those who don't understand the affects of bloatware, malware and other time-gathered flaws to a computer, it's frustrating that relatively new hardware can be so useless.

So help your staff, friends and family if they face such frustrations - especially if they happen to own any weapons.

Here's hoping some clever PC maker steps in to hand Hinch a new, less frustrating computer to replace the last one he filled with lead.

But let's also hope no gun-maker does the same for the weapon confiscated by police, in case he finds the latest version of Windows too much to bear.