C.H.I.P. will teach you coding basics and let you play games 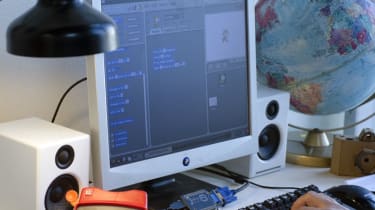 The Raspberry Pi B+microcomputer has dropped to 16 in cost, following the launch of a cut-price rival, C.H.I.P.

The Raspberry Pi Foundation has stated that the price drop is "aside effect of the production optimizations" brought in by the Raspberry Pi 2's development.

Skeptics, however, have insinuated that it may be a direct response to C.H.I.P.'s theft of its title as king of the budget microcomputers.

The Raspberry Pi competitor traised 18 times its $50,000 funding goal on Kickstarter, and the mostbasic version ofC.H.I.P costs just 6 and is due to ship in January 2015.

Raising $915,739 from 18,093 backers on the crowdfunding site, it features a1GHz Allwinner R8 Cortex A8 processor with Mali-400 graphics, 512MB RAM and 4GB storage in addition to Wi-Fi and Bluetooth 4.0, neither of which are available on Raspberry Pi as yet.

Running on Linux, C.H.I.P works with any screen and comes with a whole host of applications preinstalled so you don't have to worry about downloading anything once you've got it up and running.

The device itself measures just 2.3 inches by 1.5 inches and is compatible with other peripheries, like keyboards and televisions.

It only has one USB port though, so you'll have to be selective about what you decide to plug in. Other inputs include a component port, although you can add on a VGA or HDMI adaptor if you with to upgrade your display.

The secret behind the low price of C.H.I.P is buying components in bulk to get a discount.

The company behind the processor, called Next Thing, said on its Kickstarter page: "C.H.I.P. is built to be flexible. Whether you're building yourself a wall clock that counts down time to the next bus at your stop, or setting up a network of hundreds of solar-powered air quality sensors for use in disaster relief, you need the same basic tools to start from: a processor, a way to exchange data, and a way to power everything."

It comes pre-installed with Scratch,an easy to learn language that teaches the basics of programing by making stories, games, and animations - and can be hooked up to game controllers via Bluetooth to play new and retro games.