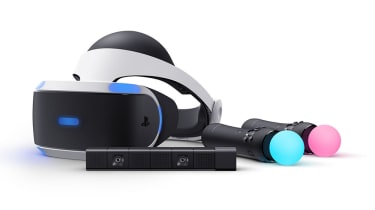 PlayStation VR - previously known as Project Morpheus - is Sony's answer to virtual reality devices such as the Oculus Rift.

As one of the industry leaders in the gaming space, the fact that it wants to get in on the ground floor of the virtual reality revolution is unsurprising, but PlayStation VR looks like it could be a very strong start for Sony.

Sony is planning to release a new VR headset next week (October 14th), with a new cable management design that will allow headphones to be connected via a new headphone jack at the back of the device. The updated design will also merge the VR headset and processor unit's cables into one.

According to the announcement on Sony Japan's blog, it'll also feature an updated processor to support HD-passthrough - a technology that means users can watch HDR content without having to unplug the headset's HDMI from a PS4 and plug the headset directly into the TV, for example, which is how the previous version of the headset worked.

The VR headset will be available from 913 stores across the world, giving it the biggest distribution footprint for Sony's VR products to date. It'll come in new packaging so customers don't get confused with the old and new versions, the company said.

Existing games and content will work with the new Sony VR headset, which is good new for existing owners that simply want to upgrade.

The second-generation Sony VR headset will cost 44,980 yen+tax (300+tax), although Sony hasn't revealed when it'll be available in the UK. It will arrive in Japan first, with rest of world launches later.

Sony's PlayStation VR headset has passed one million sales, with the company saying the device has exceeded expectations.

Sony's Interactive Entertainment head, Atsushi Morita, said virtual reality, and specifically its headset, will become even more popular as time goes on and people begin to realise the potential of the technology.

"VR technology is the greatest innovation since the birth of television," he said, as quoted by the BBC. "VR allows you to travel to World Heritage Sites or to space while staying at home. It's like a time machine or a door to anywhere."

One major advantage Sony has over its competitors is that the Sony VR headset is a whole lot cheaper than rivals including Facebook's Oculus Rift and HTC's Vive at just $399 (300).

Piers Harding-Rolls, a gaming analyst at research company IHS Markit, told the BBC that another reason Sony is proving so successful in the space is because it has a market-ready userbase to try out the VR headset, whereas other companies don't have such a large existing set of customers.

However, Sony shouldn't rest on its laurels just yet, because until there's enough immersive content to support VR gaming, users may get bored of the device, causing sales to slump, he added.

"There have been games that hint at VR's potential, but there is still more to come I'm sure," Harding-Rolls commented. "The introduction of peripherals with haptic feedback is a step forward, so it's likely we will continue to get games such as first person shooters being made that use these new technologies, but I'd also like to see more exploration based titles, which build on the immersion delivered by VR."

Sony has revealed it's sold close to a million Playstation VR headsets in the four months since the hardware went on sale.

Speaking to The New York Times, CEO of Sony, Andrew House, said the company was "a little bit careful" about its sales expectations.

"It's the classic case in any organisation - the guys who are on the front end in sales are getting very excited, very hyped up," House told the newspaper in an interview. "You have to temper that with other voices inside the company, myself among them, saying let's just be a little bit careful."

House said the company aimed to sell one million VR headsets in the first six months. Wit two months to go, it's already sold 915,000 and that's been partially held back by a lack of stock, though Sony said supply would improve by April.

Sony may well be happy with the sales figures, but stats for the full year suggest the industry hasn't taken off quite yet. Research firm SuperData said 6.3 million devices shipped last year, below expectations for the hardware however that was based on an estimate of 745,000 for the Playstation VR, so perhaps sales are rosier than analysts realise.

We got the chance to sit down and test out PS VR, and we were pretty impressed by what we saw.

The headset itself was light, comfortable, and easy to put on. In fact, it's noticeably more comfortable than its PC rivals, and the quality is remarkably close.

PS VR is half the price of the HTC Vive, but while you might expect a corresponding dip in quality, you'd be hard-pressed to tell the difference. 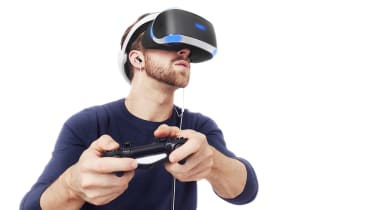 Objectively comparing the two, the Vive's picture clarity is a shade better, but when you're actually using the PS VR headset, you honestly won't notice the difference.

As one of the first PS VR demos, The London Heist has probably been one of the most talked-about experiences for the system. The demo we played involves taking down waves of gangsters on motorbikes and in SUVs from the passenger seat of a moving van.

It's heaps of fun, and is a great showcase for the PlayStation Move controllers. There's loads of stuff to pick up and interact with in the cab, and the combat involves physically reloading by picking up spare magazines.

Unfortunately, the move controllers are noticeably less precise than the ones included with the HTC Vive, and picking up objects can sometimes be a little fiddly.

We were pleasantly surprised by Rigs. A 3-vs-3 multiplayer shooter, Rigs is one of the 'sport-combat' games popularised by titles like Team Fortress 2 and Overwatch, with players piloting various types of battlemech. 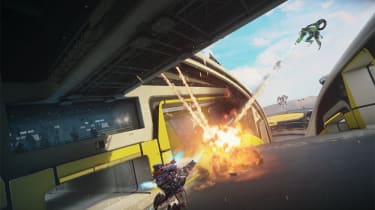 Rigs on the PS VR

The game uses a form of 'tank controls' - the left analogue stick is used for movement, while the right stick handles orientation on the horizontal axis. In order to aim your mech's weapons, players have to physically turn their head to look at their target, which can take a little getting used to.

Once you've got the knack, however, Rigs is a fast-paced and incredibly enjoyable shooter, with just the right balance of 'easy to pick up, tough to master' challenge.

Overall, while PS VR can't quite compete with the HTC Vive or Oculus Rift in terms of tech specs, its value proposition is immense. It's an absolute bargain compared to its rivals, and is only going to get more impressive with the introduction of the PS4 Neo.

PS VR launched on 13 October 2016 with an RRP of 349, making it the cheapest of the big VR headsets to make it to the market. Given the previous shock at the high price-points of both the HTC Vive and Oculus Rift, many lauded PlayStation VR's comparatively affordable cost, including Oculus founder Palmer Luckey, who called it "totally fair". 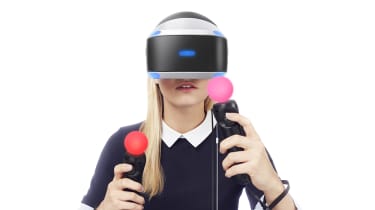 Sony's top brass had previously established that affordability was a key concern; PlayStation vice president Masayasu Ito confirmed to Polygon that PS VR "is not for the person who uses a high-end PC. It's for the mass market".

For the price, you get a VR headset, headphones, a discrete processing box, and a demo disc. Sony has opted to exclude the PS camera from the core bundle, which is required for VR play. PS Move controllers, supported by some VR titles, must also be bought separately.

As we'd expect from a modern VR device, PlayStation VR features full positional tracking, sensing where the user is in real time. This allows users to experience immersive 3D games in a full 360-degree environment.

Users can interact with their games via the standard Dualshock gamepad, which has certain motion-control functions built in. However, Sony has also opted to incorporate elements from its PlayStation Move products, a rival to Microsoft's Kinect motion control system that never really caught on. 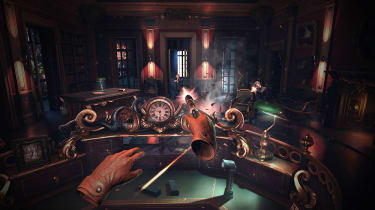 The London Heist on PS VR

The Move controllers, along with Dualshock controllers and the PS VR visor itself, can be used in a number of different combinations for asymmetric multiplayer gaming. This means different players use different control schemes and inputs to perform different roles.

The headset also features a 'Cinematic Mode', putting players in a virtual theatre, allowing them to get the effect of playing their games on the big screen. Interestingly, this also works with Xbox One or Wii U games, though you can't access any virtual reality functions.