Steam Hardware Survey indicates that the Rift has surpassed the Vive

While the leaked images of the Oculus Rift indicated that it was shipping with an Apple TV-style remote, Palmer Luckey surprised crowds at the device's unveiling by taking the wraps off a totally new input system.

Oculus Touch, as it has been dubbed, is a set of two wireless controllers that feature triggers for sensing grip on the palm and index fingers, as well as having traditional buttons and thumb sticks.

With built-in positional tracking similar to the headset, the controllers provide physical haptic feedback, which enables users to pick up and interact with virtual objects just as they would with real ones. In practise, the controllers are supremely comfortable, and the most instantly natural and ergonomic VR inputs we've tried. 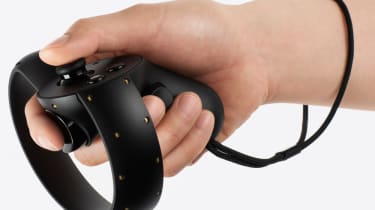 The Oculus Rift will also ship, and be fully compatible, with an Xbox One controller for Windows. Included as part of Oculus' partnership with Microsoft, this is to allow developers and users to work with an already-familiar input system.

To make it easier for developers to work with, both the Unreal Engine 4 and Unity 5 game creation tools is integrated into the Oculus Rift software. This will allow developers to preview any VR experiences they create from within the Rift itself.

The Rift uses a dedicated software platform, Oculus Home, to display its content on. Similar to the Xbox dashboard, it features different subsections for content, as well as tiled previews, storefronts and social integration. Thanks to Windows 10's native support for the Oculus Rift, users can also stream games from an Xbox One to the headset, viewing them in a virtual theatre.

Unlike many of its competitors, the Rift features built-in earphones, which can be adjusted for comfort. They're also detachable, which will allow gamers that are particular about their audio requirements to use their own headsets.

One of the Rift's drawbacks is that it needs a seriously powerful PC in order to properly run it. Company executives previously quoted a ballpark figure of around $1000 as the amount a sufficiently-specced machine would cost. 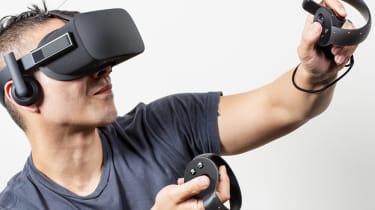 To start with, any prospective Rift customers will need a desktop PC with a CPU and graphics card equivalent to - or better than - an Intel Core-i5 4590, and an Nvidia GTX 970 or an AMD R9 290, as well as 8GB of RAM.

For those that don't build high-powered gaming PCs for fun, Oculus has partnered with a number of different PC manufacturers to create a certification program.

Specific PCs from OEMs including Dell, Asus and Alienware carry badges proclaiming them "Oculus Ready", meaning they are guaranteed to support the device straight out of the box.

Due to the highly GPU-intensive nature of the Oculus Rift's requirements, the headset is not compatible with Macs.

As well as games, Oculus is planning to bring VR movie content to its device, and the company has created its own production house, Oculus Story Studio to create experiences.

Henry, the second title from the division, is helmed by former Pixar alumni Ramiro Lopez Dau, and picked up an Emmy award for Outstanding Original Interactive Program. The company debuted another production, Dear Angelica, at the Sundance Film Festival 2016.