Intel is working to deliver a patch 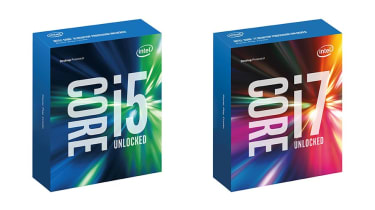 12/01/2015:A major bug has been discovered in Skylake chips, which causes them to freeze under heavy workloads.

While the fault only applies when the CPU is handling "certain complex workload conditions", Intel said, this will still be something of an embarrassment for the company, as this is exactly the kind of situation Skylake is supposed to perform well in.

"Intel has identified an issue that potentially affects the 6th Gen Intel Core family of products," said the company in a statement.

"This issue only occurs under certain complex workload conditions, like those that may be encountered when running applications like Prime95. In those cases, the processor may hang or cause unpredictable system behaviour."

The company has not disclosed what exactly has caused the problem, but said it is working with distributors to deliver a fix via a BIOS update.

07/12/2015: Intel's Skylake chips could be bent, warped or even broken under the weight of third-party coolers,customers have been warned.

The problem was flagged by German site PC Games Hardware, who found that heavier heatsinks could mess up users' processors, as well as motherboard sockets.

This is apparently due to the thinner substrate used in the Skylake chips as opposed to their Broadwell counterparts, despite the fact that Intel claims they should be able to take the same weight.

The company has said that the specifications for the chip and motherboard socket are available for manufacturers to follow effectively absolving itself of responsibility, so users should be careful when fitting third-party heatsinks.

9/10/2015:The first wave of Skylake-powered devices have started to arrive onto the market, and they look good.

As one might expect, Dell has been quick to update their products to Intel's latest processor, refreshing its XPS portfolio of high-end ultrabooks with 6th-generation chips.

Microsoft's latest products also come fitted with the new processors. Not only is the Surface Pro 4 available with Skylake processors, the new chips will also be found in the company's debut first ever laptop, the Surface Book.

2/09/2015: Intel has announced details of its Skylake laptop processors with new branding for its Core M line of power-efficient hybrid and laptop chips and, in a first for the company, a Xeon-branded laptop processor.

Intel's new Skylake, or sixth generation Core M, processors will be branded as Core m3, Core m5 and Core m7 and are designed for hybrids, tablets and very thin, fanless ultra-portable laptops. All will be dual-core chips with 4.5W TDP. One of these new Core M processors will be at the heart of a new Intel Compute Stick mini PC although details about this revamped Compute Stick aren't currently available.

The far more powerful Xeon E3-1500M V5 quad-core processor will not only have ECC memory and be certified for the stable running of certain professional applications but will have an unlocked multiplier for overclocking. Intel claims that the 45W TDP chip can be successfully overclocked to 4.2GHz with air cooling alone.

Other new sixth generation Core processors will fall into a number of different families. U-series processors will be dual-core 15W TDP chips designed for ultra-portable laptops, all in one PCs and mini PCs. The Xeon E3-1500M is part of the H-series. 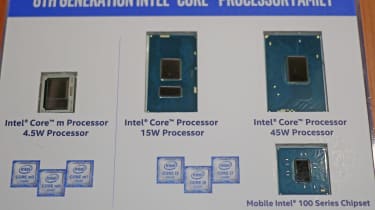 Desktops haven't been forgotten, of course, with the previously leaked Core i7-6700K and Core i5-6600K part of the new S-series processors which will range up to 91W TDP and will fit new motherboards with an LGA1151 socket.

Naturally, Intel claims its new sixth-generation Core laptop processors are its best ever. The 14nm process used means a physically smaller package which should mean even thinner and smaller computer designs. DDR4 memory is supported and more instructions can be processed per clock and at higher frequencies.

Iris-class integrated graphics will be available as part of the 15W U-series Core processors for the first time, promising faster graphics performance. All Skylake integrated graphics chips should be able to play 4K video at 60fps and work with up to three separate 4K displays connected simultaneously with built-in support for the H.265/HEVC codec.

Battery life should apparently be longer, even when compared to the already power efficient Haswell and Broadwell processors, thanks to a number of new technologies. Speed Shift ramps up performance to quickly complete demanding tasks and then shuts everything down once it's done to save as much power as possible. Duty Cycle Control reduces power leakage during very low power usage scenarios.

Intel isn't just emphasising the usual benefits of faster performance and longer battery life with its Skylake laptop processors. Chipset-level support for tablet-style sensors such as accelerometers should allow manufacturers to produce more sophisticated hybrids and laptops without increasing the cost.

Intel is also continuing to push Thunderbolt 3 which is not only faster than previous versions of Thunderbolt but also now share the USB-C connector. Skylake will also support Wi-Gig for wirelessly connecting peripherals such as port replicators and will also have support for the second generation of RealSense cameras which are needed to work with Windows Hello authentication in Windows 10.

There are even alleged security benefits, with the new Software Guard Extensions providing trusted memory regions which should protect against privileged software attacks while the Memory Protection Extensions should prevent buffer overflow attacks.