We get hands-on with the very first Steam VR headset 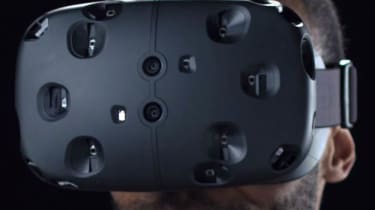 The HTC Vive is one of the big three virtual reality devices set to debut in the next six months, alongside the Oculus Rift and Sony's Project Morpheus.

Competing with these behemoths, the Vive is also the first Steam VR device to make it to market, and takes full advantage of Valve's platform.

The full details on the Vive's release date, pricing and technical specs can be found in our hub, but the key details are the visuals.

This is a far more essential figure than the resolution - while a lower quality screen will be jagged, pixelated and visually unappealing, it's the low frame rates and high latency of earlier VR devices that were the persistent causes of motion sickness.

As the Vive demonstrates, those problems are no longer present in most cutting-edge VR hardware. The Vive is perfectly smooth and responsive, with next to zero latency, which is especially impressive given the amount of information it has to deal with.

Rather than just the positional head-tracking that current versions of the Oculus Rift use, the Vive allows for full real-time room tracking, too.

Thanks to two lighthouse' base stations, fitted in each corner of the room, the Vive maps out a playing area from 3ftx3ft up to 15ftx15ft in size, and allows you to move around it at will.

It also includes two motion controllers similar to Playstation's Move batons and the forthcoming Oculus Touch units, which allow users to reach out and interact with objects in a virtual space.

Thankfully, clattering into walls and furniture won't be a problem, as Steam helpfully brings up a laser-wire boundary box, which fades into existence if you start straying too close to the edge.

Be warned though - you'll want to make sure you leave an extra arm's length of space beyond that, as you will frequently be compelled to reach beyond the grid.

While there are some games such as Elite: Dangerous and Alien: Isolation that have varying degrees of jerry-rigged support for VR, there aren't many games built specifically for virtual reality devices. As such, the main source of VR demos are short, purpose-built experiences designed primarily to show off the hardware's capabilities.

We were lucky enough to get an extended session with the HTC Vive, courtesy of game developer Bossa Studios, who took us through some of the more interesting VR demos out there. First up was TheBluVR, an experiential demo set in an underwater landscape.

Designed initially for the Samsung GearVR, it's not especially interactive, but it is phenomenally pretty, filled with shoals of tiny fish, manta rays, and in a particularly memorable section, coming face-to-face with a colossal blue whale. 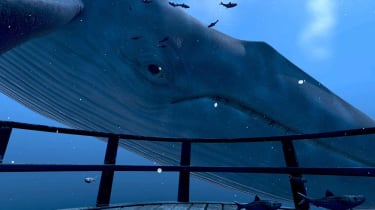 There was also a brief demo from the VR version of Bossa's hit game, Surgeon Simulator. Contrary to TheBluVR, it doesn't feature as much movement, but has huge amounts of interactivity. The game revolves around using a somewhat wonky physics engine and a set of often hilariously unsuitable tools, from hammers to lasers, to perform various operations.

The demo in question involved removing an organ from a space alien in a zero-gravity operating theatre, and was a great demonstration of the Vive's motion controllers. Using the two wands to pick up and manipulate various tools was incredibly intuitive and, despite the absurd setting, created a total sense of immersion.

This immersion was so great that when we tried to check the time on our watch, we only realised we were in VR when confronted with a wrist that wasn't there. It's a running theme, too. One of the most popular Vive demos at this year's Games Developer Conference was a Portal-themed experience that demonstrates the immense immersive power of the medium.

Set in Portal's Aperture Science laboratories, it comprises an environment built of pre-fabricated rooms that are constantly being taken apart, re-shuffled and rebuilt by the complex's robotic overseer. At one point, a section of floor falls away, and gives real sense of height that borders on the vertigo-inducing.

It was realistic to the point that it's virtually impossible to step over the edge into seeming nothingness your brain just won't let you. There were also several sudden jump-scares that were genuinely startling, and you can forget that you're not really there.

The common theme throughout all of these demos and experiences was that being able to physically walk around the space improved the level of immersion and engagement exponentially. Rather than being a semi-static observer, it makes you feel like you're genuinely part of that world. 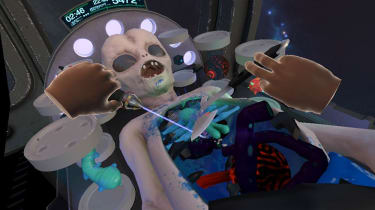 The maximum playing space is, admittedly, a little on the small side and here the Vive is a slight victim of its own success. The environment feels so real that being confined to fifteen square feet seems unreasonable.

It's got a similar issue with interaction, most noticeably in the Portal demo. Containing a bunch of things to interact with, the setting is so densely packed and intricately modelled that not being able to pick up and touch every little knick-knack is a jarring surprise.

Unfortunately the cable is also a nuisance. Sadly, VR technology just isn't advanced enough to pump that much information back and forth from headset to PC wirelessly, so users will need to remain tethered to their machine via cables.

For static devices like the Oculus Rift and Project Morpheus, this isn't a problem: as long as a user's head and arms can move freely, the wires are relatively unobtrusive. Vive, however, is different. As it involves walking around, trailing cables are liable to be a lot trickier and the Vive's wire requires frequent, conscious untangling to avoid tripping yourself up.

It can be seriously immersion-breaking, which is bad enough, but there's also the possibility that it could prove to be a serious danger in games where speed and reaction time are key. It's a problem, and one that won't be fixed before the second VR generation at the earliest.

All that said, the HTC Vive is an absolute revelation, and its limitations are vastly outweighed by the sheer awe-inspiring potential of the technology. The hardware also stacks up pretty well, despite being an unfinished developer edition. 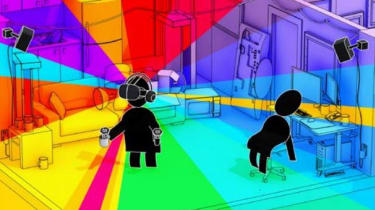 The display isn't pin-sharp, but within minutes, your brain simply stops noticing the very slight pixellation. It's also something that will improve in time for the consumer model's release.

The latency and frame rate are also spot on. Despite having to keep track of our head movements, our position and controller use, the Vive had no problem rendering everything in real-time, with no noticeable lag.

It's also surprisingly comfortable, with space for glasses, adjustable lens distance and a reasonably unobtrusive weight. It's not the prettiest device in the world, but given that it's still pre-release that doesn't matter so much right now.

On balance, the HTC Vive is incredibly impressive. That's not hugely surprising given Valve's involvement, but we're expecting the first Steam VR headset to blow a whole lot of people's minds when it comes out around Q4 this year.