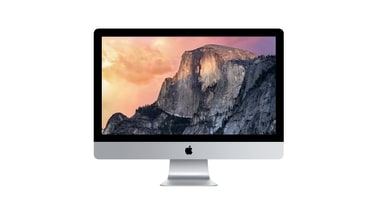 Apple has updated its iMac range with new Retina displays, better processors and a set of new Magic peripherals just one month after rolling out the iPhone 6s and iPhone 6s Plus.

The 21.5in iMac now has a 4K Retina display, bringing a resolution of 4096 x 2304 and 9.4 million pixels to the smaller of the two desktop computers - 4.5 times the pixel density of its predecessor.

Apple first wheeled out a 27in 5K Retina display iMac last yearas a new, high-end desktop, but also left the non-Retina version on sale.Now, however, all 27in desktops are being upgraded not just to 5K Retina, but a better version of the technology.

As with last year's 5K iMac, it offers 5120 x 2880 maximum resolution and is packed with 14.7 million pixels - as Apple has pointed out, that's seven times the number of pixels offered by an HD display. However, it now supports a wider DCI-P3 colour gamet, which offers a wider range of reds and greens than was available on last year's 5K iMac.

The new 2015 iMacs have also had a refresh on the inside. The 27in version now sports an Intel Skylake processor and dedicated, high-end AMD Radeon GPU. Additionally, the bigger iMac also has a faster PCI Express SSD and Fusion Drive configuration.

The 21.5in 4K version has slightly less impressive specs - it is still running on a fifth-generation Intel Core processor, but has upgraded Intel Iris Pro Graphics (as you would expect with an upgrade to 4K).

Both the 21.5in iMac and 27in iMac also come with OS X 10.11 El Capitan, the latest version of Apple's operating system, pre-installed.

In terms of pricing, the entry-level 27in iMac, costs 1,449, the same starting price as its predecessor and 500 less than the price of last year's 5K iMac.

All prices include VAT and all versions are on sale now.