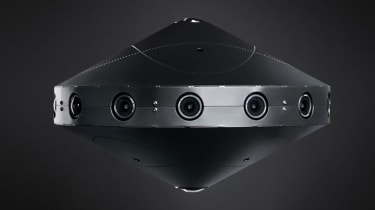 Facebook has unveiled its own open source VR camera for capturing 360-degree footage.

Launched at its F8 conference, the Surround 360 promises to drastically speed up the process of capturing VR content, requiring almost no post-production effort.

Facebook has bet big on social video becoming a major thing in the next few years, but the current lack of affordable VR recording equipment has so far limited its uptake.

The company is hoping to use the Surround to jump-start the VR content industry, offering an affordable way to film 360 videos in order to tempt to more creators to the medium.

It's aimed at professional users, however, rather than consumers. It's built to withstand harsh environments, and quickly disassembles for easy transportation. It's supposed to be able to handle multiple consecutive plane rides too, making it ideal for location shooting.

More importantly, the company is open sourcing the whole thing. All of the hardware schematics will be available on Github, as will the algorithm used to stitch together footage from the Surround's 17 cameras.

The required parts come to just over 21,000, making it one of the more affordable rigs for professional VR production. It can also shoot in 4K, 6K, and 8K resolutions, with virtually zero artifacts or visible seams from the video stitching.

Thanks to the algorithm used to stitch the video feeds together, the end result is ready in around a day. Compared to other setups, that can take weeks of professional editing and compositing before they reach distribution, the Surround 360 is much faster.