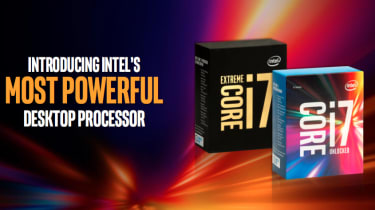 Intel has just announced an 'Extreme' edition of its Core i7 Broadwell processor family, with a whopping 10 cores.

The new Core i7-69XX and 68XX models will be available in 6-core, 8-core and 10-core configurations, and will have up to 35 per cent faster multi-threaded performance than the previous generation.

They will all have a base clock speed of at least 3GHz, with Intel Turbo Boost Max Technology 3.0 pushing them to at least 3.5GHz. They will also be fully unlocked and overclockable, with per-core overclocking, AVX ratio offset and VccU voltage control.

Intel is now going after content creators and streamers in a major way. The new chips are aimed at so-called 'mega-tasking' operations, and are designed for users who want to perform multiple CPU-intensive tasks at once.

Game streaming, where players use services like Twitch to broadcast live footage of their play sessions to viewers on the internet, is a major use-case the company is highlighting.

The new chips are able to maintain a consistent 60FPS framerate and stream the footage at 1080p, all while encoding the video stream 25 per cent faster than the previous generation.

Non-streaming gamers will also see hefty benefits, as the new processors consistently hit framerates of 85FPS and above - well over the current standard of 60FPS.

Regular content creation is also being targeted, with speed and performance boosts of around 25 per cent for 4K video editing, 360-degree video creation and VR rendering.

Intel has evidently decided to capitalise on the booming YouTube economy as epitomised by stars like PewDiePie, who makes a six-figure income from his YouTube channel.