These devices from IFA could change how you get work done 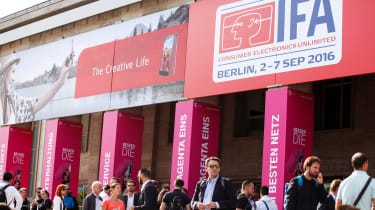 With Berlin's Messe full of brightly coloured fridges, acres of televisions and all manner of cleaning robots, it's clear IFA is a consumer-focused show but set aside the wearables and VR, and there's plenty for business users, too.

Here's five technologies on show at the Berlin expo that could help you get your work done, and are well worth keeping watch for their British arrival. 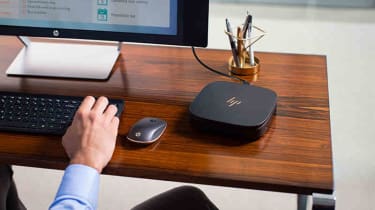 Desktop computers are boring, functional boxes but HP managed to come up with something novel. The HP Elite Slice is a modular PC. It's not the first of recent years the Acer Revo lets users add functionality by stacking components like Lego, while the Asus Avalon brought the concept to gaming but it's the first to strictly focus on business use cases.

There's two models of the HP Elite Slice. The first is a 6.5in by 2in computer that you can add features to with a "slice" rather than stringing them in with cables, such as extra storage, improved audio speakers, fingerprint sensor, optical disk drive and so on. It uses USB-C with power to connect to monitors with a single cable.

The second model, which is not yet available, is for meeting rooms, and has a built-in Skype button, Bang & Olufsen speakers, dual microphones, and wireless charging so that meeting attendees can simply place mobile devices on top to charge a handy way to keep people focused on the meeting and not their smartphones.

It runs Windows 10 on an Intel Core i7 chip and is expected to arrive in the US starting from $699 for the standard version and $949 for the Meeting Rooms version, with UK arrival and prices not yet announced. 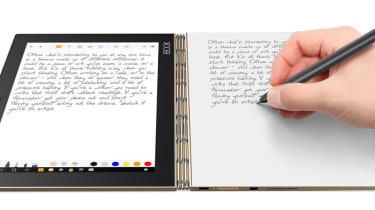 The Lenovo Yoga Book has two tricks: first, it looks like a standard tablet but has a fold-out "create" pad that turns into a soft keyboard for typing complete with haptic feedback that can also be used to take notes.

That doesn't mean you need to "write" on the tablet with a stylus. Instead, Lenovo's clever tech lets you make your notes on your usual paper pad with its specialised stylus-cum-pen, which copies them back to the Yoga Book. That means you can effectively use the Yoga Book as a clipboard to hold your notebook, take notes easily on paper, and automatically have a digital copy. That's a slick feature for anyone who regularly takes notes (there's a reason it was a favourite among journalists at IFA), as well as anyone who fills paper forms as part of their job, with the device removing the need for computer data entry.

The Lenovo Yoga Book claims to offer 12 hours of battery life, and features a 360-degree hinge to open it at any angle. It comes in two versions, one running Android and the other Windows 10. The Atom chip may struggle on the latter, but it's a wise move to offer a Microsoft option for businesses that still haven't included mobile OSes in their IT set-up. The Android version will cost 430, while the Windows one will cost 510. 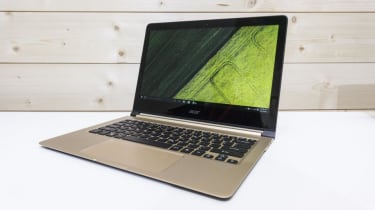 If you're looking for a plain old laptop, IFA also had a few of those, and the model that will catch professional eyes is the Acer Swift 7. The laptop is Acer's thinnest yet the company claims it's the first to come in under 10mm and it weighs in at a light 1.1kg.

That makes it easy to carry around between meetings, but there are other business-friendly features, too. It has dual USB Type-C ports, low-power Intel Core i5 or i7 chips, and a 13.3in, Full HD IPS display, as well as a promise of nine hours of battery life. Plus, it has a massive touchpad, perfect for touch gestures.

That all may sound fairly standard, especially after modular desktops and magic notepads, but the Acer Swift 7 is a good-looking laptop that should find its way to the C-Suite although at a starting price of 1,299, they may well be the only ones who can afford it when it lands in the UK next month. 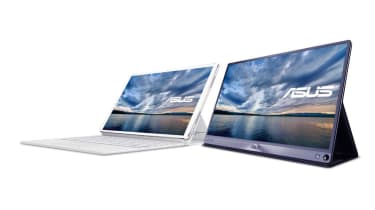 One of the downsides of working on the go is being stuck with a single display. Asus has an answer for road warriors lamenting the loss of their desk-based monitor: the Asus ZenScreen portable 15in monitor. It weighs 800g and is 8mm thick, offers Full HD resolution, and features Type-C USB ports for charging its battery and connecting it to your laptop at the same time.

The ZenScreen comes with a case/cover that props it up in either portrait or landscape mode, and there's also a hole in the bottom corner so you can prop it up using a pen or pencil.

It's not yet clear when the Asus ZenScreen MB16AC will land in the UK or at what price point, but in Europe it will cost 269.

This next mobile working tool will cost a bit more than a portable monitor: Dr Dieter Zetsche, chairman of Daimler and CEO of Mercedes-Benz, introduced an In Car Office for Mercedes and Smart cars that will pull key data from Microsoft Exchange into the vehicles' displays.

If you're stuck in traffic, you need not miss your conference call or struggle to dial in with your smartphone. Instead, the In Car Office system will know your schedule and simply patch the call through your car via your smartphone, letting you get to work despite your commuting challenges. It will also give you driving directions to your next meeting.

In the future, Zetsche said, the company hopes to support social networking and even video conferencing apps such as Skype, noting that as cars get smarter and take over more of the driving work for us, we'll be able to take our eyes off the road for the monthly sales meeting during our commute, letting us make better use of time spent in cars. The system will start to arrive in Mercedes models in mid-2017, he said in a keynote at IFA.