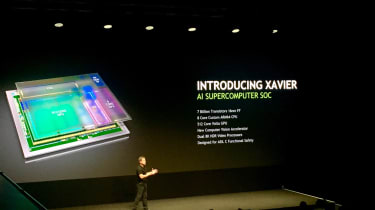 "A super computer SoC this is the largest processor endeavour that we have ever done. No only is it large, it's multi-function, and throughput is really quite tremendous," said the firm's CEO, Jen-Hsun Huang.

"This is the greatest SoC endeavour I have ever known, and we have been building chips for a very long time," Huang added.

The processor will deliver 20 TOPS (trillion operations per second) of performance, while consuming only 20 watts of power. As the brain of a self-driving car, Xavier is designed to be compliant with critical automotive standards, such as the ISO 26262 functional safety specification.

Packed with 7 billion transistors, and manufactured using 16nm FinFET process technology, a single Xavier AI processor will be able to replace Nvidia's Drive PX 2 configured with dual mobile SoCs and dual discrete GPUs, at "a fraction of the power consumption", the firm said.

Nvidia is hoping that Xavier will help bring self-driving car technology to automakers, tier 1 suppliers, startups and R&D organisations that are building autonomous vehicles, whether cars, trucks, shuttles or taxis.

Xavier samples will be available the fourth quarter of 2017 to automakers, tier 1 suppliers, startups and research institutions who are developing self-driving cars, Nvidia said.

The deal will combine TomTom's HD map coverage, which already spans more than 120,000 km of highways and freeways, with Nvidia's Drive PX2 computing platform to accelerate support for real-time in-vehicle localisation and mapping for driving on the highway.