The future is here, and it lives in your kitchen 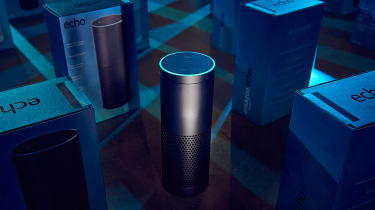 While similar offerings have been around for years, many digital assistant have been hampered by the quality of their voice recognition engines, forcing users to phrase their commands in specific, often unnatural ways in order for them to be understood.

Thankfully, Alexa's voice recognition is excellent. Built with a natural language engine, she understands queries and commands in organic speech patterns, making her much easier to use. The Echo is also outfitted with seven microphones which use beam-forming and advanced noise cancellation to detect input from across the room, even with music playing.

Voice command is triggered with the 'wake word', which can be set to 'Alexa', 'Amazon' or 'Echo'. Once she detects the keyword, Alexa will fully activate the microphone and begin listening to your question. Once she has heard a command, processing and execution usually takes no more than a few seconds.

There were a few times when we had to repeat ourselves, but when we checked the transcripts of our requests in the companion app, we found that most of those were down to Alexa mishearing our mumbles. Similarly, she had very few problems parsing our commands, and we didn't have to rephrase many questions - although she can't understand string command yet, so if you want her to perform two actions, you'll have to ask her to do them separately.

Where it runs into problems is with awkwardly nouns, so if you're a fan of obscure, unpronounceable electronica artists, prepare to experience some embarrassing trial-and-error as you attempt to get Alexa to play bands like "!!!". If you're really struggling, you can also control it via your phone like a normal wireless speaker.

Another unexpected hitch is that it can be awkward to use in a house with multiple people. A couple of times we were listening to Spotify at work, only to find ourselves kicked off whatever we were listening to because one of my housemates was playing something on the Echo.

Alexa also had some issues hearing us while playing music at full volume, forcing us to manually turn it down. On the other hand, the highest volume setting is seriously loud, so we can't imagine it being too much of a problem in day-to-day use.

Aside from that, the Echo's voice command is largely excellent. Alexa had no problem responding to commands from across rooms, even when we were facing away from her. Machine learning also promises that it will get better at understanding you the more you use it, although we've yet to see any concrete evidence of this. She also coped well when exposed to a range of regional accents.

As you may have heard, Alexa has a truly staggering amount of easter eggs and humourous references up her digital sleeve. If you ask her to tell you a joke, she will respond with something from a fairly extensive library (including some that made me actually laugh out loud), and she'll do the same with interesting facts.

You can also prompt her with various references from classic movies, games and TV shows to elicit a pithy response. There are those you would expect - 2001, Star Trek, Terminator - but there are heaps more interesting and obscure ones, including a series of Monty Python quotes and even an Eddie Izzard reference.

They're only really funny once, and you're unlikely to spend too much time reeling through them unless you're showing Alexa off to guests, but they're a fun little aside and they go a long way towards injecting her with a level of personality that elevates her beyond the level of mere appliance.

Alexa isn't going to change your life - not right away, anyway. Instead, you'll find that she saves you time in a bunch of small ways. The few seconds it takes you to check the weather on your phone or find your favourite album on Spotify might not initially seem like much, but those seconds add up, and over time you'll find she ends up giving you hours of your life back.

It's also the first reliable, completely handsfree AI assistant we've seen, and the ability to check your calendar or to-do list in the morning while making your breakfast is something we've really come to appreciate. We found that being able to play music with one command meant we were much more likely to listen to music around the house, too.

In many ways, though, it's the personality that clinches it. You may have noticed that throughout this review, we've been referring to Alexa as 'she' rather than the more software-appropriate 'it'. That's because thanks to her level of human personality, Alexa genuinely feels like an addition to the household, to the point where we've started reflexively thanking her every time we ask her to do something.

We've been living with Alexa for around a week, and even though there's still a lot she can't do, we can honestly say that we would miss her if she wasn't there. On top of what she can do already, the cloud computing infrastructure that Amazon has built her on means that for Alexa - theoretically, at least - the sky's the limit.

The Amazon Echo is a great speaker, but it's Alexa that really shines. Amazon's AI assistant shows us a world beyond touch interaction, and does it with so much polish and panache you'll wonder how you ever lived without it.